(CNN) -- Will Smith's Hancock wasn't the first superhero with bad habits and a bad attitude. Hellboy, the protagonist of "Hellboy II: The Golden Army," has a bit of the devil in him: His skin is red; he has two shorn-off horns on his head, a gargantuan club fist and a long, slippery tail. 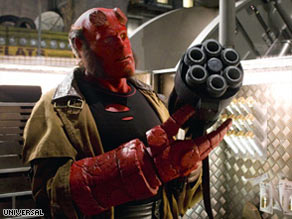 Ron Perlman returns in the title role in "Hellboy II: The Golden Army."

He also has a down-to-earth side: a fondness for Cuban cigars, Mexican beer, TV and candy. He has a short fuse and he'd like a little appreciation for his efforts, please.

He deserves it, too.

This rank outsider isn't a billionaire like Bruce Wayne or Tony Stark. He's not even a scientist like Bruce Banner. He's more of a working stiff, a slugger with a gruff manner and a stogie in the side of his mouth -- but he wants to bat for the right team. (According to writer-artist Mike Mignola, the character was inspired by his father, a cabinetmaker.)

Hellboy -- or "Red" to his friends -- has switched studios since his 2004 big-screen debut, from Columbia to Universal. Not that it shows. Writer-director Guillermo del Toro is still pulling the strings, and the key creative personnel are all back, including Ron Perlman in the title role, Selma Blair as the pyrokinetic Liz (now Mrs. Hellboy), Doug Jones as the piscine Abe Sapien (the brains to Red's brawn), and -- behind the scenes -- cinematographer Guillermo Navarro, and art whizzes Stephen Scott and Peter Francis.

Between them, they conjure up one hell of a creature feature.

"Hellboy II" boasts a dazzling multitude of imaginary beings: the deceptively delicate tooth fairies (so called because they eat bone, with a fondness for teeth in particular); the elfin king whose antlers grow out of his head to form a crown; the plantlike forest god that collapses into a strangely beautiful floral mulch right under the Brooklyn Bridge; the magnificent Angel of Death, an old crone who unfurls her wings to reveal a sparkling set of eyes (an avian variation on the creepiest creation in the acclaimed "Pan's Labyrinth," del Toro's last movie).

Then there's the redoubtable Johann Kraus, an officious but in many ways admirable German who only exists as a vapor trail -- except when he's bottled up in an ingeniously modified, but still splendidly archaic, deep-sea diving suit.

When a filmmaker can invest even a puff of smoke with so much chutzpah you know he's on to something. It's wonderful to see del Toro let his imagination run rampant like this. iReport.com: Did you see "Hellboy II"? Share your review

The plot concerns an ancient race that's determined to wage war on humanity, but it's secondary to del Toro's amazing characters.

The Mexican director's first Hollywood movies ("Mimic" and "Blade II") were far less distinctive than his Spanish-language films: "Cronos," "The Devil's Backbone" and "Pan's Labyrinth." You couldn't really call "Hellboy II" an advance on the latter -- "Pan's" was nominated for six Oscars and won three -- but it's obvious he relishes this material. It's pulpy and hammy and unashamedly lowbrow, and del Toro has the confidence and power to make it his own. The film feels very free, loose and (unusually for a special-effects picture) improvisational.

An outsize personality such as Perlman is in his element here. Even when the wisecracks fall short -- there are an awful lot of "ass" gags -- they are closer to the grubby, subversive impulses of the comic books than the over-hyped, market-tested, industrial-strength blockbuster adaptations Hollywood churns out.

It's not for nothing that the central tension running through this movie is Red's anarchic streak, his sometimes irresponsible need to be his own man in the Bureau for Paranormal Research and Defense (the "X-Men"-like institution where he works) and in his marriage. Scratch the surface, and this is a film about love and loyalty, figuring out where your deepest bonds lie.

Highbrows may damn "Hellboy II" as a "comic book movie," though even they would have to grant that its wonderful idiosyncrasies indicate brilliance. But it's more than that. Hellboy does so much growing up over the course of these 110 minutes, we may have to call him "Hellman" from now on.

Let's hope Universal stays the course and gives us that opportunity. People as creative as del Toro and his gang need all the support we can give them.