(CNN) -- Train wrecks are intrinsically spectacular, and Will Smith's new movie offers a doozy. Two of them, in fact. 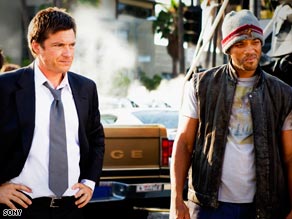 Jason Bateman and Will Smith star in "Hancock."

In the first, Jason Bateman's genial public relations guy Ray is sitting in his car, snarled in traffic and oblivious to the locomotive bearing down on him until it's almost too late.

Fortunately for Ray, John Hancock (Smith) is on the case. Using his Superman-like powers, Hancock flips Ray's car up and over in a neat backward somersault, safely out of harm's way. At the same time he thrusts out his arm and stops the train in its tracks. While Ray is grateful, the guy in the car underneath his isn't so sure -- and the damage to the derailed train stretches back a half-mile or more.

We all know that Will Smith "owns" the July 4 weekend -- so much so, there aren't any other big openings this week (aside from the small-scale "Kit Kittredge: An American Girl," which began in limited release last week). Since "Independence Day" he's virtually become synonymous with Big Summer Fun. And he makes it look so easy, too.

"Hancock" tinkers with that self-confidence a little bit. Apparently immortal and impervious to pain, Hancock fulfills the superhero's brief -- he safeguards the citizenry of Los Angeles -- but he's sunk well below complacency into an alcoholic stew of resentment and contempt for his public. When a young fan stirs him from a drunken stupor to chase some bad guys in the movie's opening scene, Hancock sends him off with an insult: "What do you want, a cookie?"

Later, he picks up an obnoxious kid who has pushed his luck too far and flings him into the stratosphere, catching him 30 seconds later with obvious reluctance.

In short, this is not the agreeable Will Smith we know and love, and even in this summer of edgier, angrier action heroes (see also "Iron Man" and "The Incredible Hulk"), Hancock may be the first full-blown jerk to front a blockbuster. iReport.com: Share your review of "Hancock"

But before you jump to conclusions, this is not the problem with the movie. Though the cynical, adult edge to the comedy may limit the film's audience (it is rated PG-13) it also qualifies as a welcome change. Hancock's reckless heroism -- and the wreckage he leaves in his wake -- inspires the film's funniest stuff (which is why you've probably seen it all in the trailers). Cussing, pulling on a bottle of booze as he chases down bad guys and dressing like a wino, Smith has fun playing against type, and in possibly his best big-screen performance yet, Jason Bateman makes an engaging comic foil.

Like "Incredibles" patriarch Mr. Incredible before him, Hancock has alienated the authorities with his DIY approach to problem-solving. They even issue a warrant for his arrest. Ray -- who owes the guy his life and has invited him into his home to meet the wife (Charlize Theron) -- encourages Hancock to surrender himself, serve some time, address his alcohol and anger-management issues, and wait for soaring crime statistics to pave his early release.

It's when this scenario plays out that Peter Berg's movie jumps the tracks. Writers Vincent Ngo and Vince Gilligan have concocted an outrageous, mind-boggling twist that comes so far out of left field you would need a crystal ball to see it coming.

No spoilers here, but it doesn't work, not in the short term and not in the big picture either. It's as if we've been whisked from one kind of movie -- a brisk, superficial but entertaining high-concept comedy -- and into the theater next door, where they're showing some sort of tragic "X-Men" knockoff. The last half-hour of this 92-minute movie is a fiasco.

Berg's shaky-cam technique doesn't help, nor does a weak, inadequate villain (played by Eddie Marsan). Still, it's rare -- and startling -- to see a big-budget movie fall apart so dramatically. Whether it was inspired by ego or economics, more than anything the turnaround feels like a colossal collective failure of nerve.

"Hancock" will likely post strong long weekend figures, but just watch those numbers plummet as the word gets out. A superhero can overcome many things, but not a movie that goes off the rails.

All About Will Smith