The shadows of a 'Dark' year

(CNN) -- At the time of his death, Heath Ledger had just concluded his work as the Joker in "The Dark Knight," the sequel to 2005's "Batman Begins." 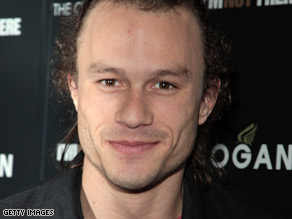 Heath Ledger died in January at age 28. He had been expected to hit new heights of stardom.

The buzz surrounding his performance was electrifying. He was remaking the Joker; he wasn't a camp comedian like Cesar Romero or a malevolent clown like Jack Nicholson. He was pure nihilism, with his jagged makeup and ragged hair. Even glimpses of his smile on the "Dark Knight" movie posters were thrilling.

And then he was gone. "We have concluded that the manner of death is accident, resulting from the abuse of prescription medications," read the New York City medical examiner's office report, affectlessly.

Who knows what could have happened? The hype surrounding "The Dark Knight," partly fueled by Ledger's death, turned out to have been warranted; the film earned critical praise and planeloads of money. Ledger has been posthumously nominated for a Golden Globe and a Screen Actors Guild award and is expected to receive an Oscar nomination, as well. Had he lived, he could have named his price.

We'll never know. "Prediction is very difficult, especially of the future," the physicist Niels Bohr is credited with saying.

Ledger's movie, "The Dark Knight" -- with its uncertain, bleak Gotham City --seemed symbolic of the year in entertainment. A writers' strike cast a pall over awards season. The paparazzi's favorite target, Britney Spears, was institutionalized for a time. Pixar's brilliant "Wall-E" depicted an Earth abandoned to the waste of consumerism.

See some of the year's top entertainment stories »

Even the presidential campaign, source of so many laughs for late-night comedians, was fraught with 3 a.m. phone calls and "terrorist fist bumps."

Why wouldn't people be attracted to change and hope?

Hollywood, usually a prime provider of optimism, is littered with the stories of lights put out early. James Dean was 24 when a Ford coupe crossed into his lane and hit his Porsche Spyder head-on near Cholame, California. River Phoenix was 23 when he died of a drug overdose outside the Viper Room in Hollywood. They are two of too many.

Asking "what if" is a dead end. "Saturday Night Live," many years ago, used to mock it: What if Superman grew up in Nazi Germany? What if Eleanor Roosevelt could fly? The past is past, what's done is done, and the future can be fickle, anyway.

So many of the year's stories had unexpected outcomes.

Consider: For almost two decades, movie audiences eagerly awaited a new Indiana Jones film. This year, they got their wish with "Indiana Jones and the Kingdom of the Crystal Skull," and the film was widely criticized for taxing the credulousness of even its most dedicated fans. It's one thing to chat with a centuries-old Grail Knight, but surviving an A-bomb by hiding in a refrigerator? Not quite.

Then there was the ultimate reality show: the election. If you'd polled media professionals last year, they might have named Hillary Clinton and Fred Thompson as the future nominees. John McCain's campaign was on life-support; Barack Obama's was struggling. We all know how things turned out.

And the election also made a star -- a celebrity, if you will -- of Sarah Palin, the Republican vice presidential candidate. Palin had a charisma -- the TV execs call it "breakthrough" -- that, at times, overshadowed the man at the top of the GOP ticket. iReport.com: What was your most memorable entertainment event this year?

There was something else about Palin: She looked like Tina Fey, once the "Weekend Update" anchor and head writer for "Saturday Night Live," now the star of the smart "30 Rock." Fey went back on her old show and had great success parodying Palin, driving "SNL" to some of its highest ratings in years. (Palin also looked like "King of the Hill's" Peggy Hill, but unlike Fey, the animated character wasn't a Second City-trained comedy performer who could strike in real time.)

Some observers foresee a bright future for the Alaska governor; others believe she'll wear out her welcome. Time, again, will tell. Cast members of "Saturday Night Live" are object lessons: John Belushi and Chris Farley, gone before their times; Robert Downey Jr. (1985-86) emerges from a lifetime of troubles with two hit movies and Entertainment Weekly's Entertainer of the Year distinction.

Other notables had a chance to live out three rich acts. Paul Newman, who epitomized the best qualities of a performer and human being -- thoughtful, charitable, capable, courageous -- died in September. Visionary author Arthur C. Clarke died in March; elemental guitarist Bo Diddley died in June.

And comedian George Carlin, who viewed life as "a ticket to the freak show" and "a zero-sum game," died in June. Carlin, who reveled in absurdity, had the right attitude to try to figure out "what if." In his surrealist way, he noted that the light at the end of the tunnel could be daylight -- or, maybe, an approaching train. Either way, it'll be here soon enough.