Maher: There's gotta be something funny about Obama

(CNN) -- On Tuesday, America elected its first black president, Barack Obama. But what does Obama's sweeping victory mean for the United States? 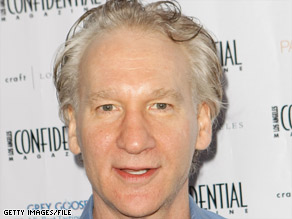 Bill Maher is the host of "Real Time with Bill Maher," which airs on Friday nights on HBO.

Bill Maher has the answer to that, and other questions -- including why he wants President George W. Bush to stay at home for the next 76 days.

Maher, the host of HBO's "Real Time with Bill Maher" and the star of the current film "Religulous," was a guest on Wednesday's "Larry King Live." He talked with CNN's King about Sarah Palin's future, George W. Bush's past and the impact of GOP adviser Karl Rove. The following is an edited version of that interview.

Larry King: Were you ever -- I don't want to use the word scared -- were you ever worried last night?

Bill Maher: Why? What happened?

I think, you know, we all had this paranoid feeling like we're Charlie Brown and they're going to snatch the football away again. So, you know, until about when he won Pennsylvania, that's when it started to look pretty good for the people who were for him.

King: What does this election say to you, Bill?

Watch King and Maher talk about the election »

And it does ring a little less true when only a day before you're calling the guy a socialist, a communist, a terrorist, anti-Semitic, anti-American.

Oh, we lost? He's a great guy. Forget what I said yesterday. Let's all get behind the guy I just said was a communist. Please.

King: Did the McCain campaign -- I know you admired him in the past -- did it disappoint you?

Maher: Terribly. I think it even disappointed the people who were voting for him.

I sensed something in conservatives reacting to the election yesterday. Even the ones who voted for McCain, they sort of were relieved. I sensed that. It was like, yes, I guess I kind of had to pull the lever for McCain, but secretly a part of me knew that this country needed a breath of fresh air, needed a new kind of president, a new kind of politics, a new face, a smart guy, a flexible guy, a supple leader.

King: Is Gov. Palin the new star of the Republican Party?

Maher: If they're not very bright, she is. I mean, that's going to be the gut check for the Republicans ... what direction are they going to go in now?

Now, I think politicians are usually led by the idea that they want to win elections. And Sarah Palin was a bit of an Alaskan albatross around John McCain's neck -- not that he would have won anyway.

King: You said you don't want President Bush meeting with any more foreign leaders between now and the inauguration. Why?

Maher:: Because I don't trust him. He's got 76 days left to pull off one more giant screw-up and I don't think it's beyond him. I mean, the man does have a track record, Larry.

You know, I keep saying it, but I don't think this man will be happy until he leaves the White House smoldering behind him as he walks back to Texas.

King: You recently issued one of your new rules decreeing that Obama must give comedians something to work with. Any suggestions?

Maher: No. It's very difficult. We have been spoiled, first with Bill Clinton and then George Bush. And here's a president now who -- he's not stupid. He's not angry. He's not a phony. He's not fat. He's not cheating on his wife.

Who needs a jerk like that around for the next four years? Come on.

King: So then you must want Gov. Palin to stay around, comedically.

Maher: I do and she will. I think what people did not understand about Gov. Palin was that she campaigned for that job. She wanted it. She lobbied for it. She's a very ambitious person. And, of course, she's a super religious person. So she believes that God chose her for this job. I guess -- I guess God had a bad night yesterday, because she didn't get it.

But, you know, the Lord works mysterious ways, as we know. So maybe he's saving her for next election or the next after that.

She's only 44 years old. I mean she could be on the public stage for the next 30 years.