LONDON, England (CNN) -- Apparently in Hollywood, the hair's the hardest. Not styling it, but creating it, in this case on the back of an imaginary mammoth. 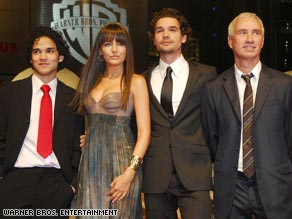 Roland Emmerich grins and bears it as he poses for photographers with the stars of "10,000 BC."

"At the beginning of every movie," Roland Emmerich explains, "I talk to my visual effects supervisor. She always reads the script, then she comes running into my office and says: 'It's impossible Roland, we can not do this.'"

"She explained to me: 'Every hair is like a one of a million, it has to react to the other hair, and then there is the wind, and the movement of the animal, it's just a mathematical nightmare'. So I said: 'Great, let's do it.'"

The results speak for themselves. A herd of thundering mammoths takes a starring role in one of the trailers for "10,000 BC."

They look realistic enough; certainly more realistic than the one positioned on the red carpet for the film's world premiere in Berlin.

see pictures of the world premiere »

It stands -- after some considerable effort -- at the entrance to CineStar theater in Berlin's Potsdamer Platz, the location for the first big public screening of Roland Emmerich's new film.

see the mammoth going up.. and down »

He's nervous. For a Hollywood director who's renowned for outrageous concepts and over-the-top effects, he's not very fond of fanfare.

"It's good for the movie. We want to promote the movie. That's the only reason why I do it," Emmerich says.

He's speaking at the Regent Hotel in Berlin on the morning of the worldwide premiere of "10,000 BC."

There's a long day ahead; eight or so hours of interviews with the world's media and film critics, then the film premiere and the premiere party.

Warner Brothers, the film's distributors, have booked every room in Berlin's Regent Hotel. Nothing is left to chance.

"The coordinating central office where all of the press gathers for the press credentials and just to make sure that the timing is right because the schedule is quite intricate," says the film's producer Michael Wimer, as he leads Revealed on a tour of the hotel.

Upstairs there are the interview rooms, make-up rooms "to make sure that our people look as beautiful as possible", and the all important "monitor room."

Inside the monitor room is a row of television screens showing live feeds of interviews taking place down the hall.

"People get to stay in here and look and see if there's a consistency of information, to see if the interviews are going well or not," Wimer explains, "and basically just to make sure that everything is going the way we want it to."

Revealed: "Have you noticed any mistakes?"

Wimer: "No... so far. So far we have professionals, which is pretty important because some of our actors are pretty young and for them to be doing this at such a high level, such a professional level, says a lot about how they've been prepared. I think this is going to be a good day for us."

Hundreds of people line up three-deep along the temporary barriers outside the CineStar theater in Berlin's Potsdamer Platz, as photographers provide the familiar sparkle of camera flashes that greet every world premiere.

Roland Emmerich arrives in suit and trainers and immediately bounds over to a group of fans who are waving books and photos.

This is one premiere that's more about the film maker than the stars.

"I think it's interesting because you know normally it's about the stars, about the main characters," says Steven Gaetjen, a German television presenter who'll be compering the event.

"But he's the person that invented the story; he's the man who made the movie."

"Anything that happens in Berlin attracts a huge crowd but tonight is very special because it's a world premiere and sort of like a lost son has returned to Germany."

And that lost son has brought people with him; a group of South African extras who played the mammoth hunters.

Michael Wimer: "Somewhere around the end of the shoot, Roland said to these guys: 'Well, the next part of it, after of course a year of production, is the premiere.'"

"He said: 'If we have the premiere in Europe I promise I'll fly you guys up.' And Roland, true to his word, contacted them about two months ago and said: 'Hey guys, we're doing the premiere, in Berlin and I'm sending down some tickets and we'll take care of the hotel rooms.'"

"They just got here day before yesterday and it's just the most fun thing to see the whole group getting back together again," Wimer says.

"It's a little odd that we call them the mammoth hunters when we're walking around Berlin, but it's pretty charming and we hope they're going to have a blast tonight on the red carpet."

A twittering spreads through the audience as the lights dim and the curtains open.

When she's abducted by a gang of mysterious horseman, D'Leh embarks on a journey across unchartered territory to rescue her. Along the way, he and his band of followers discover unknown civilizations. Gradually their small band turns into an army.

After fending off saber tooth tigers and vicious terror birds, they confront their final challenge -- to overthrown a tyrannical God who has enslaved his people.

After the premiere, guests file up a smaller red carpet to the premiere party at Goya nightclub in Berlin.

It is time to relax and share their thoughts on the film. Revealed went into the public area and asked the general public what they thought. Have you seen the film? What did you think?

"I think the action was great but the story was a little too thin," said one woman, a view shared by a couple of film-goers.

"The pictures were great, really, really great, but for me it was a bit too simple."

"No, I'm sorry, it's not my type of movie, but it was fun. We had some drinks and some nachos."

Other comments ranged from the mildly enthusiastic...

"It took a long time, two and a half years for this, but it was quite amusing. I enjoyed it yes. I liked 'Independence Day' and I liked the Patriot. This one wouldn't be one of my favorites."

"It was very exciting and it was very enormous with the big mammoths and stuff. I think it's a big success for the film, hopefully for Emmerich. It's the 3rd film I've seen from him and I am of course a big fan."

"I was amazing; it was a Roland Emmerich film. All the special effects he made, all the ideas he has... great, great."

As for Roland himself, he's put the dilemma of creating realistic mammoth hair behind him and is focusing on his next film.

"By the time the movie's out there, you have seen it probably a thousand times," he says, "and you cannot watch it anymore. Because you would, like, go crazy."

"So, I don't watch anything anymore and I don't read any reviews. I just avoid that this movie exists and concentrate on the next one."