(CNN) -- Gov. Rod Blagojevich's pick of a prominent African-American to succeed Barack Obama in the Senate has led to suggestions that the move is calculated, but the governor says he's just doing his job. 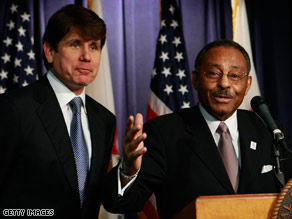 Blagojevich on Tuesday announced he'd appointed former Illinois Attorney General Roland Burris to replace Obama in the Senate, ignoring warnings from Senate Democrats who say they will block anyone he appoints.

Obama said Tuesday that he agrees with the Senate Democrats' decision to block an appointment by Blagojevich, but it's unclear if the Senate has the right to do so.

FBI agents arrested the governor on December 9 after federal prosecutors alleged, among other things, that he had tried to sell Obama's former Senate seat. Blagojevich denies wrongdoing and has ignored calls to resign.

Blagojevich's announcement left observers asking -- whether the governor was playing a game of racial "chicken," daring Senate Democrats to snub a respected African-American.

"What he has done is this: He's chosen a black person and dared the Democratic Senate not to seat him because there would then be no black senators in the Senate whatsoever.

"I'm not saying that the former attorney general isn't a man of integrity and wouldn't otherwise, in his own right, be able to serve competently as a senator.

"But you don't have to be a cynic to understand that race was part of Blagojevich was doing right here," he said.

Burris was the first African-American to be elected to statewide office in Illinois, winning the first of three terms as comptroller in 1978. Twelve years later, Burris was elected state attorney general, the second African-American in the country to reach that position.

But CNN contributor Roland Martin said that Rush was trying to "make it very clear that he's not going to sit back and watch any attacks on the character of Roland Burris."

Martin put the blame on lawmakers for letting it get to this point.

Rush defended his support for the appointment of Burris on CNN's "Larry King Live" Tuesday.

"This is not about Roland Burris. This is about Gov. Rod Blagojevich, who, let's remember, was accused of trying to sell the Senate seat, who is undergoing right now impeachment hearings in the Illinois Legislature, who has been charged by the U.S. attorney, and who the United States Senate, all the Democrats said should not make the appointment," Rep. Jan Schakowsky, D-Illinois, told CNN.

While Toobin said the Democrats deserve credit for not accepting any appointments by the governor, Martin said that move was "outrageous, because you should be judging a person who they're sending to the Senate, not the guy who picked him."

"This guy has really figured out how to change the story about what's going on in Chicago right now. He created a big mess that he put in [Senate Majority Leader] Harry Reid's lap.


"And he's won some friends in the African-American community in Illinois, where he doesn't have a lot of friends right now," he said.

Regardless of the racial politics swirling around the nomination, it's unclear whether the Senate Democrats -- who have vowed to block any Blagojevich appointment -- have the power to do anything about it.

As sitting Illinois governor, Blagojevich has the sole power to name Obama's replacement.

The Constitution says the Senate can control its membership, but there's a Supreme Court case that suggests otherwise.

In the late '60s, the House of Representatives tried to keep Adam Clayton Powell out of the House because of corruption allegations, but the Supreme Court said it didn't have the right to do it.

"So the question of whether the Senate can keep Burris out is very much an open one. And we could be looking at several months of litigation about this," Toobin said.

All About Rod Blagojevich • Barack Obama