Lawsuit seeks to take 'so help me God' out of inaugural

WASHINGTON (CNN) -- A number of atheists and non-religious organizations want Barack Obama's inauguration ceremony to leave out all references to God and religion. 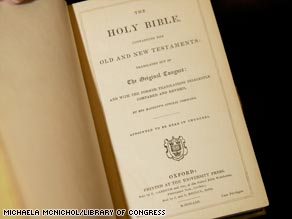 President-elect Barack Obama will use the Bible Abraham Lincoln used for his inauguration.

In a lawsuit filed Tuesday in Washington, the plaintiffs demand that the words "so help me God" not be added to the end of the president's oath of office.

In addition, the lawsuit objects to plans for ministers to deliver an invocation and a benediction in which they may discuss God and religion.

An advance copy of the lawsuit was posted online by Michael Newdow, a California doctor and lawyer who has filed similar and unsuccessful suits over inauguration ceremonies in 2001 and 2005.

Joining Newdow in the suit are groups advocating religious freedom or atheism, including the American Humanist Association, the Freedom from Religion Foundation and atheist groups from Minnesota; Seattle, Washington; and Florida.

The new lawsuit says in part, "There can be no purpose for placing 'so help me God' in an oath or sponsoring prayers to God, other than promoting the particular point of view that God exists."

Newdow said references to God during inauguration ceremonies violate the Constitution's ban on the establishment of religion.

Newdow and other plaintiffs say they want to watch the inaugural either in person or on television. As atheists, they contend, having to watch a ceremony with religious components will make them feel excluded and stigmatized.

"Plaintiffs are placed in the untenable position of having to choose between not watching the presidential inauguration or being forced to countenance endorsements of purely religious notions that they expressly deny," according to the lawsuit.

Among those named in the lawsuit are Chief Justice of the United States John Roberts, who is expected to swear in the new president; the Presidential Inauguration Committee; the Joint Congressional Committee on Inauguration Ceremonies and its chairwoman, Sen. Dianne Feinstein of California; and the Armed Forces Inaugural Committee and its commander, Maj. Gen. Richard Rowe Jr.

The two ministers scheduled to participate in the ceremony also are named: the Rev. Rick Warren and the Rev. Joseph Lowery. The document includes a quotation from Warren on atheists: "I could not vote for an atheist because an atheist says, 'I don't need God.' "

Newdow told CNN that he didn't name President-elect Barack Obama in the suit because in addition to participating as a government official at the ceremony, he possesses rights as an individual that allow him to express religious beliefs.

Newdow said that as a member of a racial minority, Obama should have respect for atheists, who also are members of a minority.

Newdow said religious references in the inauguration ceremony send a message to non-believers.

"The message here is, we who believe in God are the righteous, the real Americans," he said.

Newdow said it's unconstitutional to imply that atheists and others are not as good.

He acknowledged that his suit is unlikely to be successful.

"I have no doubt I'll lose," he said, adding that he hoped to eventually succeed through appeals and hoped future inauguration ceremonies would exclude religious references.