(CNN) -- Anyone who doubts Roland Burris' qualifications to serve as the next senator from Illinois may want to head to Chicago's Oak Woods Cemetery. 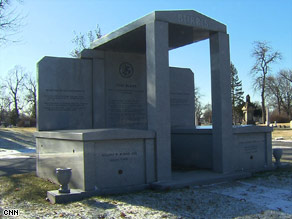 There, Burris, whom embattled Illinois Gov. Rod Blagojevich appointed to succeed President-elect Barack Obama in the Senate on Tuesday, has erected a granite mausoleum listing his many accomplishments.

The memorial also notes that Burris was the first African-American exchange student to Hamburg University in Germany from Southern Illinois University in 1959.

There appears to be enough room to add "U.S. senator" to the memorial, but Burris may never get a chance to serve in Washington.

A Senate Democratic aide told CNN on Wednesday that plans were in the works to prevent Burris from being seated in the Senate.

After Blagojevich made the surprise move to appoint Obama's successor, Senate Democrats praised Burris but said they could not accept any appointment by Blagojevich after his arrest on corruption charges earlier this month. Federal prosecutors say he conspired to "sell" Obama's Senate seat for campaign donations and other favors.