2009 political predictions: What will be the big story?

(CNN) -- This past year was full of unexpected twists and turns on the campaign trail. 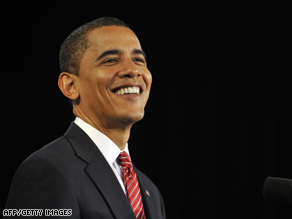 Barack Obama will take office with a big to-do list in front of him.

With a new president taking over and a host of problems awaiting him, there's no telling what will happen in 2009.

CNN's political analysts and contributors offered up some of their predictions for the upcoming year:

The biggest story will be the continued violence in the Middle East -- the Israel/Hamas war and the uncertainty of whether we can pull our troops out of Iraq and Afghanistan.

While most Americans and our new president will be focused on the ongoing economic crises, the national security team of Hillary Clinton, Robert Gates and retired Gen. James Jones will be in a crisis-a-day mode for the foreseeable future.

The secondary story will be who plays the role of the the loyal opposition to the new president. With the diminished role of the Republican Party, does it become a true opposition party led by the conservatives building for the future, or is it a party that crosses the aisle to seek compromise with the Democrats and the new president? More: Politicians who fell from grace

And does John McCain play the lead role in becoming the facilitator for compromise? If the Republican Party is not effective, does the national media become the opposition voice?

The overarching political issue of 2009 will be the economy. It appears that President-elect Barack Obama will benefit from widespread goodwill and -- though this is not certain -- a sense that things are near the bottom.

The great unknown is whether there will be any turnaround. If there is, look for Democrats to take credit. If not, look for them to continue to blame the Bush legacy.

The economy will be central in two very different political races. The Virginia governor's race will help establish whether the commonwealth has become a truly blue state. It's an open seat because current Gov. Tim Kaine is ineligible to succeed himself. The Dems are mostly low-profile names, except for Terry McAuliffe, the great Clinton fundraiser, who wants to run for the first time.

The other race is for New York mayor. Mike Bloomberg engineered a change in city law to allow himself to run a third time, and he looks like the favorite to win. But will the city's major economic problems prompt a serious challenger to emerge? I'll be watching.

2009 will be a year in which the Republican Party will be confronted with a near-catastrophic ideological rift. Read about a prediction that 'pains' Carville to make

There is no obvious Republican leader on the horizon, and the party is caught between its Southern/talk-radio base and the rest of the country on whether they should oppose or cooperate with Obama's administration.

The combination of the lack of an obvious leader and the general political combustibility of the Republican Party will lead to a dangerous fissure that will plague it until the 2012 election cycle.

Will President Obama's solutions for the economy bring people together?

Obama made a lot of campaign promises -- ones I know he intends to keep. But fixing health care, creating a new energy policy, investing in education and providing for middle-class tax relief cost a lot of money.

With an economy in tatters, how the new president marries this aggressive agenda to the all-important task of fixing the economy will be the biggest story of 2009.

He starts with two things that few presidents have had: a huge amount of good will from the American people and, importantly, a citizenry that wants to participate in the new agenda. They don't care which box they checked on Election Day. They care about their fragile paycheck.

It will be an exciting year, sure to start with more stock market scares and more layoffs. But I have a hunch that by next New Year's Eve, we will be remarking that the big political story of 2009 was the success of President Obama's first year in office.

2009 will present us with the most fundamental break in American political economy discourse since the election of Ronald Reagan in 1980.

What is the role of government? Is government the problem (Reaganomics 1980), or is government is a fundamental part of the solution (Obama 2008). This is an epochal shift.

Fareed Zakaria stated in Newsweek that "governments are more powerful than markets." There is a need for a new balance between the state/government and markets. Market fundamentalism failed (markets are not self-regulating as the banks, Bernard Madoff, WorldCom, etc. so painfully illustrated).

The question: What kind of government? This will be the challenge of the new president, his administration and the new Congress.

The most interesting political story in 2009 will be the surprisingly disharmonious relationship between Obama and the congressional Democratic leadership.

Obama will want to lead from the center, while Speaker of the House Nancy Pelosi and Senate Majority Leader Harry Reid will continually pull him left. To complicate matters, it should be noted that Reid is the GOP's top target to defeat in 2010.

And so began a great conversation about what it meant to be a Democrat. The conversation took place over organic tofu in yurts in Santa Barbara, it was fueled by Chassagne-Montrachet in Georgetown, and was concluded while scarfing down pimento-cheese sandwiches in all-night bull sessions in the basement of the governor's mansion in Little Rock.

What came from that painful reassessment was the New Democrat movement embodied by Bill Clinton, and now carried to the next level by Obama.

Now it's the Republicans' turn.

Are they the party of conservative intellectuals like David Brooks and the late William F. Buckley, or are they party of anti-intellectual know-nothings like Rush Limbaugh and Ann Coulter?

Mark Shields says there are two kinds of political parties: those that seek out converts and those that hunt down heretics. Fundamentally, that's the choice the GOP will wrestle with in 2009. If they're interested in seriously thinking this through, I know some excellent yurts in Santa Barbara.