(CNN) -- After being told by prosecutors that their testimony could jeopardize the ongoing criminal investigation, the Illinois House panel considering impeachment charges against Gov. Rod Blagojevich will not subpoena advisers to President-elect Barack Obama, the panel's chairwoman said Sunday. 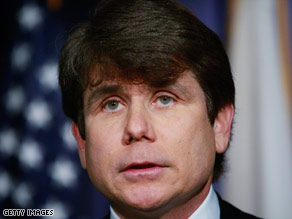 A panel is investigating whether there are grounds to impeach Illinois Gov. Rod Blagojevich.

The impeachment panel was urged to issue the subpoenas last week in a letter from Blagojevich's attorney, Ed Genson.

Genson urged that more than a dozen witnesses, including incoming White House Chief of Staff Rahm Emanuel, be subpoenaed.

Fitzgerald has previously expressed concern about the impeachment panel interfering with his investigation.

Currie said she received the letter from Fitzgerald on Friday, and although her panel will meet on Monday and might hear from Blagojevich's attorney, there will be no subpoenas of Obama advisers, including Emanuel, Obama adviser Valerie Jarrett, Democratic U.S. Rep. Jesse Jackson Jr. of Illinois or others Genson had asked to hear from.

Calls to Fitzgerald's office Sunday were not immediately returned.

Currie said her committee has offered Genson the opportunity at its meeting Monday to present information about his defense of the governor.

Watch a report on Monday's meeting »

Currie said she does not know how long the committee will continue to meet. Several people who have come forward suggesting they might have relevant information, and the panel is working to see exactly what that might be.

She said the panel has not heard from Fitzgerald on the issue of whether access to audio tapes of Blagojevich will be granted to the committee.

Contacted at his office Sunday, Genson said he would be at the committee meeting Monday, but would not discuss his plans. "I don't want to say today what I'll be saying tomorrow," he said.

According to an internal report compiled by the Obama transition team, Obama was interviewed by Fitzgerald's office on December 19, as was Jarrett. Emanuel was interviewed the next day.

The internal report, drafted by Greg Craig, Obama's choice for White House counsel, concluded that neither Obama nor his aides had any "inappropriate" contact with Blagojevich or Blagojevich's staff.

All About Rod Blagojevich • Rahm Emanuel