(CNN) -- The chairman of the Republican National Committee said he was "appalled" by a song called "Barack the Magic Negro" on a CD distributed by one of his political rivals. 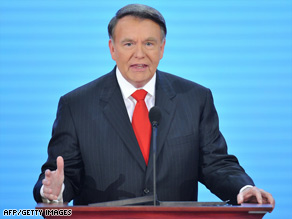 "The 2008 election was a wake-up call for Republicans to reach out and bring more people into our party," RNC Chairman Mike Duncan said in a statement reported Saturday afternoon by Politico.

"I am shocked and appalled that anyone would think this is appropriate, as it clearly does not move us in the right direction."

Chip Saltsman sent RNC members the parody CD "We Hate the USA" for Christmas, which includes the controversial tune. He defended his decision Friday, telling CNN the song was clearly intended as a joke.

Watch the controversy over the song »

The song, set to the tune of the 1960s pop hit "Puff the Magic Dragon," was first played on Rush Limbaugh's radio show in 2007. Its title was drawn from a Los Angeles Times column that suggested Obama appealed to those who feel guilty about the nation's history of mistreatment of African-Americans.

Saltsman said the song, penned by long-time friend Paul Shanklin, should be easily recognized as satire directed at the Times.

Also Saturday, Peter Yarrow, who co-wrote "Puff the Magic Dragon," called Saltsman's decision to distribute the parody tune "offensive," and "shocking and saddening in the extreme."

"It is almost unimaginable to me," Yarrow wrote in a statement sent to CNN, that Saltsman "would seriously be considered for the top post of the Republican National Committee. Puff, himself, if asked, would certainly agree."

Yarrow, a member of the 1960s folk group Peter, Paul and Mary, was a contributor to Obama's presidential campaign.