WAIMANALO, Hawaii (CNN) -- A vacationing President-elect Barack Obama slipped away from the traveling press pool that follows him wherever he goes, taking his two young daughters, family members and friends to Hawaii's Sea Life Park. 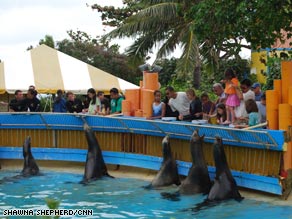 President-elect Barack Obama, and his daughters checked out the sea lions at Hawaii's Sea Life Park.

The group caught a dolphin show on Friday before visiting a touch pool and the sea lion exhibit, where it was feeding time.

CNN was the only news organization to witness the park outing.

After the park visit, the Obama group was joined by the press pool -- which arrived at the park about an hour after the Obamas but was not allowed in -- as they stopped for a sandwich and shaved ice. The reporters declined an offer from Obama to buy them some shaved ice.

The press was allowed to take photographs for more than 20 minutes -- much longer than the typical photo opportunity at such an event -- before Obama asked the crews and the large crowd that had gathered to "let me eat in peace."

The traveling press pool that accompanies high-ranking officials like the president-elect or the president is made up of about 15 representatives from all types of media -- newspaper, magazine, radio, television. Those representatives report back on their subject's movements for the rest of the media.

Their purpose is to provide a public record of the official's activities, a vital service in a functioning democracy.

On Friday, the pool went with Obama to the gym earlier in the day and then returned to their hotels after the transition team said there would be no further events.

"With no further scheduled events for the day, a lid was called until further notice," said Ben LaBolt, a transition team spokesman. "The president-elect (later) decided to take the girls to a water park, and we assembled the pool as quickly as possible."

When the travel pool was notified that the Obamas were heading to the park, they notified other news agencies -- including CNN. The pool had to return to the Obamas' vacation home to be taken to the park by the transition team; CNN's crew, not a part of the pool on Friday, was closer to the park.

When visitors of the park recognized the president-elect, they began snapping more photos and videos of Obama's group than of the marine animals. A number of Secret Service agents kept people at a safe distance, asking onlookers to keep walking after they stood looking at the group a while.

The Obamas are trying to establish a level of privacy for Sasha and Malia, as previous presidents have done with their own children. But it's been more than 30 years since a presidential child has been under the age of 10, and the fine line between keeping the public eye on the president-elect while keeping the children's privacy intact is not always clear.

Amy Carter, daughter of President Jimmy Carter, was 9 years old when her father took office. The children of Presidents Ronald Reagan and George H.W. Bush were grown when they took office, and Chelsea Clinton was 12 when President Bill Clinton took office. President George W. Bush's twins Jenna and Barbara were 20 when their father became president.

Four days ago, paparazzi staked out the Obamas' vacation rental home on the public Kailua Beach and snapped photographs of the family. The photos, particularly one of a shirtless Obama in swim trunks, caused a media firestorm.

The transition team dismissed the photo of the president-elect, but they were not pleased with the photos of the children.