(CNN) -- A new national poll suggests Illinois Gov. Rod Blagojevich could be on the top of Santa's naughty list. 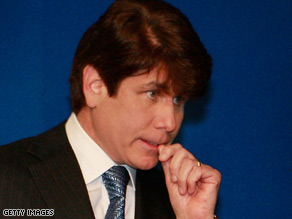 Illinois Gov. Rod Blagojevich tops new CNN poll of which politician has been the naughtiest of 2008.

Fifty-six percent of those questioned in a CNN/Opinion Research Corp. survey released Wednesday said Blagojevich, who has been arrested on corruption charges, was the naughtiest politician in 2008.

Blagojevich, accused of attempting to sell President-elect Barack Obama's former Senate seat, has said he has done nothing wrong and plans to fight the allegations.

Spitzer resigned in March after it was revealed he was Client No. 9 in a high-end prostitution ring. In November, prosecutors announced they would not be bringing criminal charges against Spitzer.

Edwards, who had been considered a major contender for the Democratic presidential nomination, admitted in August to having an extramarital affair with former campaign staffer Rielle Hunter. The former North Carolina senator also denied he was the father of Hunter's then-newborn baby.

CNN polling director Keating Holland said while Blagojevich's top spot in the survey may be due to his arrest occurring more recently than the transgressions of the others, there may be another reason. iReport.com: Do you trust your political leaders?

"Americans typically take a much dimmer view of corruption than of sex scandals, since the former is a violation of the public trust and the latter is usually considered more of a private matter," he said.