WASHINGTON (CNN) -- President George W. Bush granted pardons Tuesday to 19 citizens charged with a variety of crimes, but none was prominent. 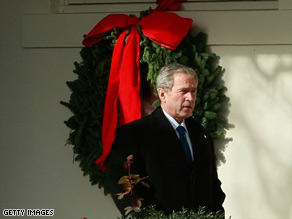 President Bush walks down the White House Collonade on Tuesday as he departs for Camp David.

Presidential pardon lists are being closely monitored in the final weeks of the Bush administration, particularly to see whether former vice presidential aide Lewis "Scooter" Libby will be granted the presidential favor.

One of the men pardoned is Charles Winters, who died almost 25 years ago. His son had worked on winning a presidential pardon for his dad, who had helped smuggle weapons to Jews fighting in what was then Palestine in the late 1940s.

"We commend President Bush's decision to grant a commutation to Reed Prior, who is deserving of a second chance," Julie Stewart, president of Families Against Mandatory Minimums, said in a written statement.

"Of course, clemencies only underscore the larger problem -- the systemic injustice caused by mandatory minimum sentences that fill the prisons with low-level drug offenders in the first place."

Bush has granted 191 pardons and nine commutations, far fewer than Presidents Clinton and Reagan in their two-term administrations. Read the full list of pardons

Among the more notable who have applied for some form of clemency are:

The parents of John Walker Lindh, who was given a 20-year sentence after pleading guilty to supporting terrorists in Afghanistan, held a news conference last week urging Bush to commute their son's sentence.

It is unclear how many more requests Bush may grant before leaving office, although administration officials have said they do not expect any last-minute announcements, as was seen when President Bill Clinton pardoned fugitive financier Marc Rich, setting off a firestorm of controversy.

A president has the sole authority to grant clemency and to whom, although a Justice Department office usually reviews applications and makes recommendations after considering standards such as a person's degree of remorse and ability to lead a responsible and productive life after release.

Roughly 1,300 requests for commutation and 860 pardon applications are still pending.

There is a long tradition of presidents issuing pardons and commutations during the holiday season.