Why some women's groups are miffed at Obama 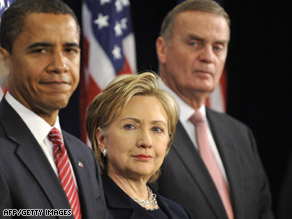 Obama is taking the big-tent approach to governing and wanted a Cabinet that stretches the tent wide.

"I think people will feel that we followed through on our commitment to make sure that this is not only an administration that is diverse ethnically, but it's also diverse politically and it's diverse in terms of people's life experience," Obama said December 16.

It might be diverse, but not everyone is happy. Some women's groups are disappointed. Among Obama's strongest backers during the election, they now say they don't have enough seats at the table.

"When you are looking at a Cabinet and you have such a small number of women in the room when the big decisions are being made, there need to be a lot more women's voices in this administration," said Kim Gandy, president of the National Organization for Women.

Bill Clinton and President Bush each had a comparable number of women in their first Cabinets, but women's groups say they hoped they'd make progress.

Amy Siskind, co-founder of the nonpartisan group New Agenda, accuses Obama of taking "shocking steps backward" and said "this constituency does not matter to the president-elect."

Obama has said he's picking people for their skills and not pandering to special interests.

"In this case, we have seen Obama emphasize credentials," said Anne Kornblut of The Washington Post. "I think they obviously knew they would get a lot of bang for their buck, so to speak, in appointing Clinton, but at the end of the day, the numbers really aren't any more impressive than any previous president."

But a national poll released December 3 suggests that Americans think Obama's getting it right when it comes to his Cabinet picks, especially in choosing Clinton and keeping Defense Secretary Robert Gates on.

That's 16 points higher than those in favor of President-elect Bush's Cabinet picks eight years ago.

The poll indicates that 71 percent approve of Obama picking Clinton for secretary of state. Democrats overwhelmingly approve of the choice, with two-thirds of independents agreeing and Republicans evenly split on the pick.

But it's not just women who are angry with Obama's choices. Other factions in the Democratic Party are, too.

Many gay and lesbian supporters are irate over Obama choosing Pastor Rick Warren to lead the invocation at the historic January 20 inauguration.

Warren, one of the most influential religious leaders in the nation, has championed issues such as a reducing global poverty, promoting human rights and fighting the AIDS epidemic.

But the founder of the Saddleback Church in Lake Forest, California, has also adhered to socially conservative stances -- including his opposition to gay marriage and abortion rights -- that put him at odds with many in the Democratic Party, especially the party's most liberal wing.

Watch more about the Warren controversy »

"[It's] shrewd politics, but if anyone is under any illusion that Obama is interested in advancing gay equality, they should probably sober up now," political commentator Andrew Sullivan wrote on the Atlantic Web site last week.

Some progressives, meanwhile, are also disappointed that Obama has tapped moderates for key positions.

People for the American Way President Kathryn Kolbert told CNN that she is "deeply disappointed" about the choice of Warren and said the powerful platform at the inauguration should instead have been given to someone who has "consistent mainstream American values."

Linda Douglass, a spokeswoman for Obama, defended the choice of Warren, saying, "This is going to be the most inclusive, open, accessible inauguration in American history." iReport.com: What do you think about Obama's cabinet picks?

So the questions are: Has he made the tent too big? And does he risk alienating his core supporters before he's even taken office?

CNN contributor and Democratic strategist Donna Brazile says no way, adding, "he has a team of heavyweights, a team of rivals, that will help him set a new course, a new tone, here in the nation's capital."

Obama's team privately says wait and see. They feel it's too early to criticize his choices before they've even had a chance to be sworn in.

All About Barack Obama • National Organization for Women