WASHINGTON (CNN) -- Secretary of State-designate Hillary Clinton had $6.4 million in presidential campaign debt at the end of November, according to a report filed Saturday with the Federal Election Commission. 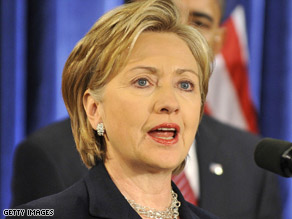 Hillary Clinton says she hopes to have her campaign debt paid before her possible confirmation as secretary of state.

The amount, though still significant, represents the lowest level of debt the New York senator's failed presidential campaign has reported this year. Clinton's campaign debt reached its peak, $12 million, at the end of June and has gradually fallen since then.

Clinton said she hopes to pay off her debt before her possible confirmation as secretary of state.

Clinton has also officially forgiven the $13.2 million she personally loaned her campaign. Under the McCain-Feingold campaign finance law, presidential candidates who loan their campaigns money from personal funds may only be paid back if they do so by the national party convention -- in this case, the Democratic National Convention held last August in Denver.

The $6.4 million in remaining debt is owed to a total of 16 creditors.

The largest unpaid amount is owed to Penn, Schoen & Berland, a political consulting and polling firm that advised Clinton during her presidential bid.

The firm's president, Mark Penn, served as chief strategist to Clinton for most of her campaign until he was forced out of his position in April after revelations that he lobbied for a U.S.-Colombia trade deal on behalf of the Colombian government despite Clinton's opposition to the measure. However, he never left the campaign entirely.