Editor's note: Hank Sheinkopf, a CNN contributor, is a longtime political consultant who was a member of the media team for President Bill Clinton's 1996 re-election campaign. Sheinkopf was a media consultant for Eliot Spitzer's campaign for New York attorney general in 1998 and has represented candidates around the country and the world. He represented Rep. Steve Israel, a Democrat whose name has been mentioned for the New York senate seat, in 2000, but hasn't had a business relationship with him since. Sheinkopf, who also represents corporate clients, does not represent any of the other politicians whose names have been mentioned for the Senate seat. For a rival view, read here. 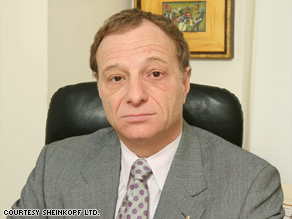 NEW YORK (CNN) -- Judging by the screaming newspaper headlines and the steamy ecstasy of the gossip columns, people from other worlds might presume that it has already come to pass: that a woman who happens to be named Caroline Kennedy was pole-vaulted above the crowd and sent with magic wand and golden slippers to the U.S. Senate from New York, in the hope of saving the Empire State and bringing goodness to all its inhabitants.

After all, why shouldn't she be sent to the Senate?

Her unique experience of writing a book or two, smiling well, appearing from time to time -- but not too often -- at city mayoral news conferences announcing help for those who attend New York City public schools -- and, well, just being a Kennedy -- should suffice.

Her social standing alone, some might argue, would give her the advantage of all advantages. A Kennedy. Camelot. Ah! The greatness of it all? Not.

The man who has to make the decision whether or not New York is to be so vaunted in representation is Gov. David Paterson, the former lieutenant governor who had the fortune of replacing morally triangulated Gov. Eliot Spitzer after Spitzer's resignation in the face of a publicly humiliating sex scandal.

Paterson will have to face the voters in 2010. So will his pick to fill the seat that will be left vacant after Hillary Clinton is confirmed as secretary of state in early 2009. The governor's poll numbers suggest that voters like him.

Paterson has taken a tack much unexpected by challenging all to tighten belts, cut spending, pay more fees to the state and get rid of waste after Wall Street's collapse and the subsequent free fall in tax collections from the financial services business.

Paterson could have a tough time. Voters don't like losing money, they hate losing services, and all the earnest explanations about fighting the good fight together won't put better food on the table or pay the bills.

On the issues of the day, Kennedy has been mighty silent. Financial cretins stealing for fun, profit and because they can? Not a word.

The auto bailout? Nada. The printing of a trillion soon-to-be inflated dollars that will further sap our savings? On such matters, Kennedy remains absolutely silent.

What about the destruction of the economy of western New York?

Does she know that there is a deeply pained world beyond the Westchester County border just a bit north of New York City that benefited little from some fairy-tale place called Camelot and less from well-orchestrated and timed public relations campaigns afforded only by the rich?

Why should Caroline Kennedy be named a U.S. senator? Is it because merit no longer matters? Surely, Kennedy offers the dazzle of an unmistakable surname and the kind of celebrity appeal that seems to follow members of the New York social elite. But for the white ethnics who gave their vote to Democrats on the promise of fairness and merit, Kennedy's star quality may not suffice.

The simple fact is that if the governor passes on other options -- candidates, many of whom serve in Congress and have earned their right to represent New York -- then he does so at his own risk.

In 1964, Robert Kennedy wanted then-Sen. Kenneth Keating's job so badly that he ran for office. President Lyndon Johnson's landslide victory in New York helped Kennedy win the election, but not before the challenger ran a campaign that made its appeal to voters and proved worthy. His niece has done neither. If Kennedy wants to be New York's junior senator, she should stand in line and run for office in 2010.

The opinions expressed in this commentary are solely those of Hank Sheinkopf.