Illinois governor: 'I have done nothing wrong' 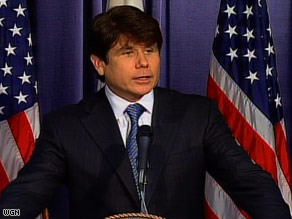 Illinois Gov. Rod Blagojevich spoke to reporters at a news conference Friday but did not take questions.

The spirited comments were the first public statements from the second-term governor about the allegations since his arrest December 9 on federal corruption charges.

Federal prosecutors have accused the governor of trying to sell Obama's former Senate seat. Prosecutors also allege the governor and his former chief of staff, John Harris, tried to have Chicago Tribune editorial board members fired by leveraging state assistance to the parent company of the newspaper, the Tribune Co., in its sale of Wrigley Field.

Blagojevich said he was "dying" to show his innocence, but maintained he would reserve his comments for an appropriate forum.

"I'm not going to do what my accusers and political enemies have been doing, and that is talk about this case in 30-second sound bites on 'Meet the Press' or on the TV news," he said. "I have on my side the most powerful ally there is, and it is the truth."

Quoting Rudyard Kipling's poem, "If," Blagojevich called on the public to be patient and reserve judgment until the facts unfold in criminal proceedings.

"If you can keep your head when all about you are losing theirs and blaming it on you; if you can trust yourself when all men doubt you, but make allowance for their doubting, too; if you can wait and not be tired by waiting; or being lied about, don't deal in lies; or being hated, don't give way to hating," he said.

Blagojevich did not take questions from reporters. Earlier Friday, his attorney, Ed Genson, said he did not feel it was prudent for the governor to answer questions now.

Genson has said that the governor did nothing wrong and that evidence obtained through wiretaps in Blagojevich's office and home was "illegally obtained."

The 76-page criminal complaint against Blagojevich includes snippets of intercepted phone calls involving the governor's alleged efforts to benefit from the Senate vacancy.

After Blagojevich's statement, Genson's co-counsel, Sam Adam Jr., told reporters that the U.S. attorney's office has not provided them with information related to the criminal complaint.

Blagojevich's arrest has thrown Illinois politics into chaos. Many of the state's political leaders -- including Obama -- have called on the governor to resign. Harris, who was also arrested on federal corruption charges, resigned days after his arrest.

Members of an Illinois House of Representatives panel met Wednesday to continue discussions about whether there is a basis to impeach Blagojevich.