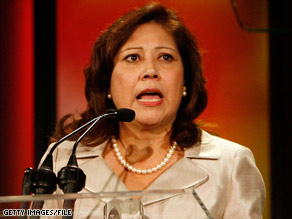 Rep. Hilda Solis is viewed as a strong advocate for working men and women by organized labor.

A Washington-based labor official for a major union told CNN's John King that the California Democrat was Obama's choice for labor secretary.

Obama is expected to officially announce his nomination of Solis during a press conference on Friday. Obama is also expected to name Illinois Rep. Ray LaHood as his choice for secretary of transportation.

If confirmed, Solis would be the third Hispanic to serve in Obama's Cabinet, along with New Mexico Gov. Bill Richardson, who is Obama's choice for secretary of commerce, and Colorado Sen. Ken Salazar, who Obama tapped to be secretary of the interior.

Obama had been criticized by some Latino groups, who said Hispanics were not being picked for key Cabinet positions after Richardson was passed over for secretary of state. Instead, Obama picked his former rival, Sen. Hillary Clinton, to be his top diplomat.

Solis, a four-term congresswoman from Los Angeles, is considered to be one of the most liberal members of the House.

"The daughter of two immigrant workers and union members ... she will be a secretary of labor working men and women can finally count on to stand up and fight for them," said Andy Stern, president of the Service Employees International Union.

"For Rep. Solis, serving as secretary of labor will not just be a job, but the culmination of a lifetime of action serving as a voice for people who work," Stern said.

AFL-CIO President John Sweeney said the nation's largest organized labor organization was "thrilled" that Solis would be the next labor secretary.

"We're confident that she will return to the labor department one of its core missions -- to defend workers' basic rights in our nation's workplaces," Sweeney said.

On Friday, Obama is expected to fulfill a promise to include Republicans in his administration by naming LaHood as his choice to head the Transportation Department. Obama has also decided to keep President Bush's secretary of defense, Robert Gates.

LaHood, a seven-term congressman from Peoria, is respected on Capitol Hill, and his appointment as transportation secretary was hailed by both sides of the aisle.

Fellow Illinois Republican Rep. Tim Johnson welcomed the selection of LaHood, whom he calls one of his closest friends in Congress.

"I think Ray has the ability to work both sides of the aisle well," Johnson said. "He's an extraordinarily talented legislator."

"He's a bipartisan guy," she said. "He's well-liked and respected."

Schakowsky described LaHood as "easygoing and congenial" and said he has a record of working with Democrats in the Illinois delegation on a range of issues.