NEW YORK (CNN) -- A budget plan by Gov. David Paterson that would plug budget shortfalls by slashing spending and raising taxes on items from sugary soft drinks to iTunes downloads is drawing criticism in New York. 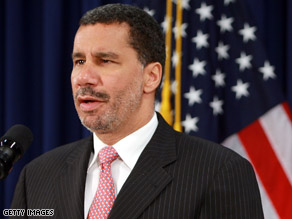 In an attempt to close a $15.4 billion budget gap, one of the largest in New York history, Paterson's $121 billion plan includes major reductions in state programs, and a wide range of tax increases for everyday goods and services.

"We're going to have to take some extreme measures," Paterson said Wednesday.

The proposed budget calls for 137 new or increased taxes, consolidation of more than a half-dozen state agencies and the closing of more than 10 state facilities, including six children, family and youth centers.

The plan also includes reductions in school aid by $698 million, $3.5 billion in health-care cuts and the elimination of 521 state jobs.

New Yorkers would face tax hikes on beer, wine, non-diet soft drinks, and digital services like iTunes downloads. Cab fares would rise 4 percent while the cost of cable and satellite TV services, tickets for sporting events and movies would also jump by the same percentage.

New York City would lose about $1 billion from the state.

Health care and education advocates, facing program reductions, are calling, instead, for an income tax increase on the wealthiest New Yorkers to help offset the budget gap.

Although spending reductions are clear priorities for Paterson, he has not ruled out income tax increases.

"This is where we are," Paterson said. "We should have thought about this when we were depending on what we thought was inexhaustive collections of taxes from Wall Street, and now those taxes have fallen off a cliff.