(CNN) -- A report to Congress that requests $73.2 billion to pay for infrastructure projects around the country includes plans for a polar bear exhibit, an anti-prostitution program, a water park ride, zoos, museums and aquatic centers, CNN has found. 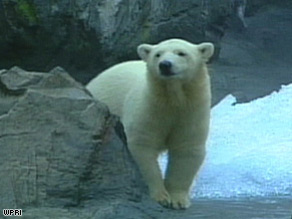 The U.S. Conference of Mayors went to Capitol Hill earlier this month with a report listing 11,391 infrastructure projects proposed by 427 cities. The mayors claimed the proposal would create 847,641 jobs in 2009 and 2010.

"Our plan calls for investments that will stimulate our economy by quickly creating jobs, fixing our aging and crumbling infrastructure, increasing our global competitiveness, and further reducing our carbon footprint," Miami, Florida, Mayor Manny Diaz said at a news conference last week. Accompanied by other big-city mayors, he held up a copy of the hefty report to stress its importance.

But a close examination of the projects by CNN shows proposals that go far beyond basic infrastructure plans for roads, bridges and other traditional public works projects.

Among the many requests is one for a $4.8 million polar bear exhibit at the Providence, Rhode Island, zoo. The zoo's director said it's needed to boost attendance.

"I am advocating for the zoo as something that will stimulate the economy in Providence," said Jack Mulvena, director of Roger Williams Park Zoo.

Pete Sepp, vice president of the National Taxpayers Union, said the polar bear exhibit and many of the other proposals in the report are just plain pork.

"To the people supporting them, these proposals aren't a joke, but to the taxpayers funding them, yes -- this will be a joke for them, only they won't be laughing," Sepp said.

When asked by CNN if he had read the entire report, Diaz said he had "read through a lot of it."

"Obviously, I didn't sit there and look at all 11,300 projects that were submitted," the mayor said, explaining that he didn't have the time to do so.

"It's hard for me to judge the particular needs that a particular city may have. It could very well be that some cities could perceive these as economic development projects," Diaz told CNN. "You can't simply just say because something sounds like it isn't right, that it isn't in fact right."

When pressed, Diaz acknowledged he was not aware of the proposal for a new $1.5 million water ride at the Grapeland Water Park in his own city. But he defended paying for parks as part of infrastructure projects.

CNN also found in the U.S. Conference of Mayors' report a proposed $20 million minor league baseball museum in Durham, North Carolina; $6.1 million for corporate jet hangars at the Fayetteville, Arkansas, airport; $20 million for renovations at the Philadelphia Zoo; and a $1.5 million program to reduce prostitution in Dayton, Ohio. Officials in those cities told CNN the projects were needed.

"People make judgments about the safety of a community by the level of social disorder. Street-level prostitution is clearly a social disorder," said Dayton Police Chief Richard Biehl, defending his city's proposal to hire social workers and provide residential treatment programs for prostitutes.

Diaz said projects such as museums are important.

"There are plenty of museums that I think people would argue that are part of a fabric of a city," Diaz said.

"It's impossible for any normal taxpaying American to read this and not come away scratching their head and saying, 'Wait a minute, this isn't about infrastructure,'" Sepp said. "This is about political power grabs, money grabs."

All About U.S. Conference of Mayors