Commentary: Caroline Kennedy would fight for N.Y. in the Senate

By Joel I. Klein
Special to CNN

Editor's note: Joel I. Klein has been chancellor of the New York City Department of Education since 2002. 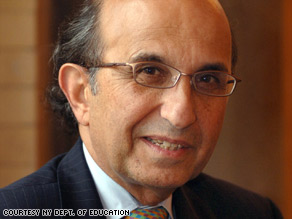 At the time, our schools were in desperate need of a strong advocate. Few prominent New Yorkers were willing to take a chance on our schools -- or invest in a system that many saw as beyond repair.

I approached Caroline about serving our city's school system because it would send a powerful message to the entire city about the importance of school reform and also because I was convinced, having known her personally, that she had the right skills to put together an office of strategic partnerships to undergird our efforts.

Without hesitation, Caroline joined our effort, and started building partnerships with the private sector on behalf of children. She essentially became a champion for New York City's children, who badly needed her advocacy.

Before the mayor and I took charge, New York City had not actively tried to raise money for its public schools. Caroline took over an office that previously oversaw donations to PTAs and alumni associations and recreated it around a model of a public-private partnership. The model she created in New York City has led to similar efforts in other school districts across America.

Private donors were historically reluctant to make gifts to public schools because there was so little accountability and transparency around spending and outcomes. Caroline created a system that measured results.

A new transparency around outcomes, along with Caroline's proficiency in articulating the goals of our reforms, gave private funders an unprecedented stake in the success of schools and students and attracted large amounts of new funding.

Caroline was highly focused, efficient and hands-on in this effort. She verified the value of her work by visiting schools to see how funds were affecting principals, teachers and students.

She was unafraid of asking hard questions, bringing diverse groups together and looking for alternative solutions. She framed problems in ways that made them solvable. These are qualities that served New York City's 1.1 million public schoolchildren well.

Under her leadership, The Fund for Public Schools has raised more than $240 million from businesses, foundations and individuals, according to the fund. Schools have used these funds to improve middle schools, improve libraries, provide arts programs and train public school principals.

Caroline's belief that government can improve people's lives -- and the way she put this belief to work on behalf of the city's public schools -- has inspired many people.

In my experience, Caroline's belief in and passion for public service are contagious. If she is selected to represent our state in the U.S. Senate, I have no doubt that she would put that passion, along with her estimable talents, to work for New Yorkers in every corner of our state.

I've spoken with Caroline this week about her decision to seek the Senate seat. She understands that the stakes have never been higher, and she knows that New Yorkers need to have a senator who will fight for them in Washington.

Caroline is prepared to work hard for New Yorkers -- bringing jobs to our state, helping us win funding for infrastructure and homeland security, and helping to improve health care and education for New Yorkers.

The opinions expressed in this commentary are solely those of Joel Klein.