Senate choice could be taken out of Illinois governor's hands

(CNN) -- Illinois lawmakers were quickly moving to take the decision of who will replace President-elect Barack Obama in the Senate out of the hands of Illinois Gov. Rod Blagojevich. 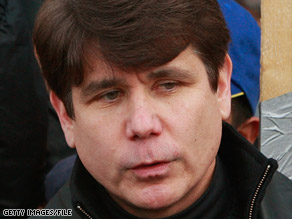 The 17th Amendment to the Constitution allows governors to fill vacant Senate seats, but politicians from both sides of the aisle have said it would be unacceptable for Blagojevich to choose Obama's successor.

"No appointment by this governor under these circumstances could produce a credible replacement," said Sen. Dick Durbin, Illinois' sole senator at the moment. Blagojevich was arrested Tuesday on federal conspiracy charges.

In the complaint against Blagojevich, federal prosecutors said he conspired to pressure possible candidates for campaign contributions and other benefits.

Watch who Blagojevich was considering »

The Illinois General Assembly will begin a special session on Monday to consider legislation that would create a special election to fill Obama's seat until 2010.

However, Blagojevich, who remains the state's sitting governor, could veto the bill. The legislature would then have to vote to override his veto if the special election is to go forward.

U.S. Rep. Danny Davis, D-Illinois, said an override was likely if Blagojevich refused to sign the bill. Blagojevich over Thanksgiving had praised Davis as a possible candidate for Obama's Senate seat.

"I think a good way to do that certainly would be to have a special election. That way there's no taint. There's no possibility that anything went awry," Davis added.

Even if Blagojevich tried to appoint a senator before a special election could be held, the Senate could refuse to seat that person.

"The Constitution gives the Senate the ultimate authority to decide the qualifications of any of its members," Senate associate historian Don Ritchie said.

After the governor's arrest, Senate Majority Leader Harry Reid, D-Nevada, called the charges against Blagojevich "appalling and represent as serious a breach of the public trust as I have ever heard."

"It is clear that anyone Gov. Blagojevich appoints to the Senate will fairly or unfairly be tainted by questions of impropriety," Reid said. "A different process to select a new senator must be put in place, and that process should not involve Gov. Blagojevich."

Watch what is in the Blagojevich complaint »

If Blagojevich's designee presented his credentials to the Senate, members could vote to reject the credentials, Ritchie said.

The senators also could vote to allow the designee to participate in Senate business while they launch an investigation and then reject the designee if they find he or she was seated improperly, Ritchie said.

The last time the Senate refused to seat a senator was in 1913 when it decided not to seat a designate from Alabama. At the time, the Senate found that the Alabama legislature had not given the governor the power to appoint senators.

There is also increased pressure on Blagojevich to resign, which would allow Illinois Lt. Gov. Pat Quinn to assume the governorship and the power to appoint someone to the Senate.

On Tuesday, Quinn called on Blagojevich to resign.

"The governor knows what he needs to do," Quinn said. "I hope he does what is appropriate for the people of Illinois... In my opinion he should step down."

"The president-elect agrees with Lt. Gov. Quinn and many others that under the current circumstances it is difficult for the governor to effectively do his job and serve the people of Illinois,' said Obama spokesman Robert Gibbs.

Obama also believes that the general assembly should consider the issue and put in place a process to select a new senator that will have the trust and confidence of the the people, Gibbs said.

The Illinois legislature could also vote to impeach Blagojevich and remove him from office, but impeachment proceedings could take months.

Natalie Bauer, a spokesman for Illinois Attorney General Lisa Madigan, said Tuesday that Madigan is prepared to go to the Illinois Supreme Court with a motion declaring the governor unfit to serve and asking the court to remove Blagojevich.

Bauer, however, said Madigan was not ready to act immediately.