(CNN) -- The Louisiana man who Saturday became the first Vietnamese-American elected to the House says he hopes his win will push more young people to become politically active. 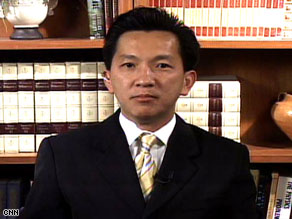 Anh "Joseph" Cao says his win shows that "really anything can happen."

"I am very honored and at this point, somewhat speechless to be the first Vietnamese-American congressman," Anh "Joseph" Cao told CNN on Sunday. "But I also hope that many of our young people will consider being more politically active and being move involved in the community. Because as you can see, really anything can happen."

The Republican defeated nine-term Democratic Rep. William Jefferson in the mostly African-American and heavily Democratic New Orleans-area district. Jefferson had been expected to win a 10th term despite battling scandals and a federal indictment for the past three years.

The contest, which drew a light turnout, was delayed until Saturday after Hurricane Gustav swept through southern Louisiana in late August. Had the vote been held during the November 4 general election, Jefferson -- who is black -- may have benefited from the heavy African-American voter turnout for Barack Obama.

"We were hoping for a low turnout because it would provide us with the greater chance of winning," said Cao, a lawyer and community activist. "Based on the demographics of the district, a high voter turnout would have gone to our disadvantage."

Cao also may have been helped by the scandal that has plagued Jefferson. Jefferson, who pleaded not guilty to 16 criminal counts of racketeering, bribery, money laundering and obstruction of justice, denies any wrongdoing.

Cao said he came to the United States at the age of 8 after his family fled Vietnam as it fell to communists.

"When I [was] 9 years old, I received a letter from my father while he was in the re-education camp," Cao said. "He told me to study hard, to work hard and to give back to your country and to your community. So I hope to do that in Congress."