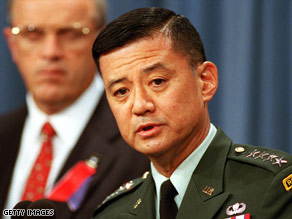 Obama was expected to make the formal announcement Sunday -- Pearl Harbor Day -- at a news conference in Chicago. Veterans groups appeared to support the selection.

"I am excited. I don't know him personally but this is a huge move," said Paul Rieckhoff, executive director of Iraq and Afghanistan Veterans of America.

For years, Shinseki, a highly decorated Vietnam veteran, has been the patron saint of Pentagon critics who say the former Army chief's sage advice was ignored in 2003, resulting in too few U.S. troops being sent to Iraq after the invasion.

Shinseki testified before the Senate Armed Services Committee in February 2003 that "something on the order of several hundred thousand soldiers would be required" to pacify the country. The comment infuriated some Bush administration officials, and he retired just a few months later.

Watch why Obama may have selected Shinseki »

Shinseki has never spoken publicly about his testimony, which has often been cited by critics as evidence that then Secretary of Defense Donald Rumsfeld ignored the advice of one of his key generals.

But as Army chief of staff, Shinseki was not in the chain of command, and played no direct role in drawing up the war plans.

Pentagon sources say that, in fact, Shinseki never advocated higher troop levels for Iraq, in part because it was not his job to do so. And sources say that just before the invasion, when asked by then-Chairman of the Joint Chiefs Richard Myers if he agreed with the war plans, Shinseki voiced no objections.

Still, Rieckhoff said, "Shinseki is a guy who had a career putting patriotism above politics. He is a wounded veteran so he understands the plight of veterans."

He said Shinseki would have to make key connections with the veterans community, adding, "This is a big name and it shows that he (Obama) is not going to treat the Veterans Affairs secretary as a low priority."

"I am satisfied with it," Rowan told CNN on Saturday, adding that the choice seems to be in the Obama transition team's pattern of "bringing in strong personalities into all the positions who aren't going to 'yes' him to death."

"When Shinseki had his disagreements with the administration, he wasn't afraid to speak up," Rowan said.

"In February 2003, General Shinseki honestly and correctly assessed our nation's military needs before the invasion of Iraq in March 2003," the statement said. "This same level of candor and honesty will serve President-elect Obama well so he can quickly and accurately identify VA's many challenges and then implement responsible solutions that take into consideration our veterans' needs and concerns."

Like Obama, Shinseki was born in Hawaii. He was the first Asian-American to reach the top spot in the U.S. Army.

When a gallery to honor Shinseki was opened at the U.S. Army Museum of Hawaii in 2006, Shinseki was humble while addressing the audience.

"I asked my Grandma Shinseki what I should say before I came here," he said at the time. "She told me, 'tell them you come from a good family ... and tell them you're a good American soldier.' "

Before he took over the Army's top post in November 1998, Shinseki spent his career with U.S. armored forces.

He also served as commander of Army forces in Europe and as chief of NATO's SFOR peacekeeping mission in Bosnia-Herzegovina.

All About Iraq War • Barack Obama