Clinton's nomination popular, but is it constitutional?

WASHINGTON (CNN) -- Polls show that Americans overwhelmingly approve of Sen. Hillary Clinton as secretary of state, but will the founding fathers veto this popular addition to Barack Obama's "team of rivals"? 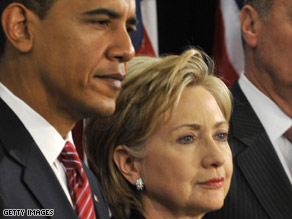 Yes, according to one conservative interpretation of the Constitution.

Article 1, Section 6 of the Constitution says the following: "No Senator or Representative shall, during the time for which he was elected, be appointed to any civil office under the authority of the United States, which shall have been created, or the emoluments whereof shall have been increased during such time."

Translation: A lawmaker cannot fill a position if the salary for that position has been raised during that lawmaker's term in office.

In January, President Bush signed an executive order increasing the salary for the secretary of state and other Cabinet positions by $4,700. Hillary Clinton has been in the Senate since January 2001.

"There's no getting around the Constitution's ineligibility clause, so Hillary Clinton is prohibited from serving in the Cabinet until at least 2013, when her current term expires," Judicial Watch President Tom Fitton said in a statement.

"No public official who has taken the oath to support and defend the Constitution should support this appointment."

Not so fast, most legal scholars say.

In the past, lawmakers have found a way around the clause, with Congress changing the salary of the office in question back to what it originally was.

"This is not going to be an impediment to her being secretary of state," Toobin argued.

One Clinton aide said that both Clinton and Obama were aware of the issue when he announced her as his choice for secretary of state. And Senate Majority Leader Harry Reid's office said congressional Democrats are moving forward with a measure similar to what has been done before.

"We think it's inadequate," Fitton said. "You can't amend the Constitution through legislation like that. ... The Constitution doesn't have any caveats. It's plain as day."

Fitton pointed to what President Reagan did when facing a similar situation.

"Ronald Reagan took a look at this clause and decided against appointing Orrin Hatch, who was a senator and still is, to the Supreme Court," he noted.

Whatever the activists, scholars or pundits say, the public has apparently made up its mind.

A CNN/Opinion Research Corp. poll conducted December 1-2 indicated that 71 percent of Americans approve of Obama's nomination of Clinton as his secretary of state. Democrats overwhelmingly approve of the choice, with two-thirds of independents agreeing and Republicans split evenly on the pick.