WASHINGTON (CNN) -- The chief executives of Ford and GM joined their Chrysler counterpart Tuesday in agreeing to accept salaries of $1 a year if Congress comes through with a bailout for the automakers. 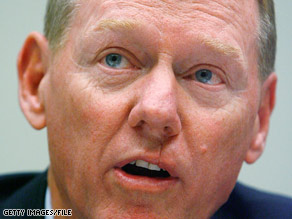 Alan Mulally, chief executive officer of Ford Motor Co., has reversed course and will accept a salary of $1 a year.

The statements came as the Big Three automakers turned in financial plans to Congress, hoping to bolster their requests for $25 billion in bridge loans.

Ford Motor Company said the salary of its CEO, Alan Mulally, would be cut to $1 a year if Ford actually borrowed money from the government. When Mulally appeared before the House Financial Services Committee last month, he said he would not agree to a pay cut.

In his previous appearance before Congress, Chrysler CEO Bob Nardelli said he would accept a $1-per-year salary if it helped Chrysler obtain its share of the rescue package.

GM plans to display some of its new high-tech cars on Capitol Hill this week, a GM source told CNN.

About two weeks ago, congressional Democrats ordered executives of the three automakers to show that they have viable financial turnaround plans when they return later this week to Capitol Hill.

Watch why the Big Three are not all in same situation »

Ford released details of its turnaround plan in a written statement Tuesday. The automaker said that, based on current business planning assumptions, it expects its overall and its North American automotive business pre-tax results to break even or be profitable in 2011.

Ford said it plans to invest about $14 billion in the United States on advanced technologies and products to improve fuel efficiency during the next seven years. It also said it will sell its corporate aircraft as part of its cash-improvement plan.

Speaking to reporters Tuesday, Senate Majority Leader Harry Reid, D-Nevada, said he would not support a bailout package unless the companies could prove that they would be viable after the bailout.

Reid did not commit to holding a vote on the bailout package.

"No one is too big to fail," Reid said. "We hope we can work something out with them."

One of Reid's aides said the senator had not read the Ford plan yet because he was involved in back-to-back meetings.

GM, Ford, and Chrysler already have made sizable cuts in production and staffing throughout the year, with additional cuts expected in the next few months.

Their plans were being submitted to the Democratic chairmen of the committees that will hear the automakers' requests -- Sen. Christopher Dodd of Connecticut, whose Banking, Housing and Urban Affairs Committee convenes Thursday, and Rep. Barney Frank of Massachusetts, whose House Financial Services Committee meets Friday.

Lawmakers asked the automakers to describe how they will restructure their businesses to become more competitive. In general, the automakers have been asked to describe how much money they have, and how much they need to stay viable in the long term. Their plans also must address how the companies will meet health care and pension obligations to workers.

After being criticized during their last trip for arriving in Washington in corporate jets, Mulally and Wagoner are driving to the nation's capital in hybrid cars -- Mulally in a Ford Escape and Wagoner in a Chevrolet Malibu.

A Ford executive told CNN the company's plan, 20 to 30 pages long, was being e-mailed to Congress. He said the plan put a heavy emphasis on advanced technologies.

Ford is worried, however, that even after doing a "bang-up job" on its report, the company may not receive what it needs, the executive said. The atmosphere in Congress was tense before Thanksgiving, he said, adding that he feels "automakers have become the whipping boy" for the industry bailout.

Automakers are counting on a rebound in demand by 2010. But that could turn out to be unrealistic because of an "auto bubble" the Big Three helped to create during the past few years.

Cheap financing, easy credit conditions and attractive pricing on cars due to overcapacity in the U.S. auto market caused record sales earlier this decade. Experts agree those three conditions are going to be missing for years to come, and sales will be weaker than normal at least through 2011 or 2012.

CNN's Ted Barrett and Kate Bolduan contributed to this report.