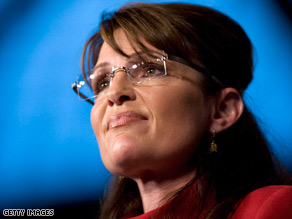 Gov. Sarah Palin is stumping for Sen. Saxby Chambliss in Georgia on Monday.

The Alaska governor and former Republican vice-presidential nominee is back on the campaign trail Monday, teaming up with Sen. Saxby Chambliss at four campaign events in Georgia on the last full day of campaigning before the state's Senate runoff election.

Chambliss is the freshman Republican senator from Georgia who's fighting to keep his seat. He's up against Jim Martin, a former Georgia state lawmaker, in the runoff election.

Chambliss won a plurality of the vote four weeks ago on Election Day, but Georgia law requires 50 percent plus one vote for a victory. Due to the inclusion of a third party candidate, Chambliss fell just shy of that threshold, forcing a runoff contest.

Palin joined Chambliss at a pair of fundraisers Sunday night. She adds her name to the list of big-name surrogates who have made campaign cameos in the last remaining Senate election this year.

Watch Palin on the campaign trail »

Chambliss has had help from a handful of former presidential hopefuls, including Sen. John McCain, who returned to the trail to campaign with Chambliss just nine days after losing the presidential election to Barack Obama.

Giuliani, Huckabee, and Romney could all make another stab at presidential politics in 2012 -- and possibly joining them could be Palin.

Palin came out on top in a recent Gallup poll that asked Republican voters whom they are most interested in seeing run for the GOP nomination in 2012.

Sixty-seven percent of Republican and Republican-leaning voters said they would like to see the Alaska governor make a bid for the next GOP presidential nomination. Romney was in second place with 62 percent, and Huckabee in third, one point behind Romney.

"[Palin has] got to go back to Alaska and do an effective job, and then I think she begins as a strong candidate in 2012 if she chooses to run," said Ed Rollins, a GOP strategist and CNN contributor.

Martin is also getting some major-league help. Former President Bill Clinton and former Vice President Al Gore have separately teamed up with Martin.

Obama isn't making a trip to Georgia, but he did lend his voice to a 60-second radio ad that's been running for more than a week. Many former Obama campaign workers in Georgia are now assisting Martin's campaign.

Martin on Monday teams up with Georgia Rep. John Lewis and other prominent Georgia Democrats before ending the day at a rally at the State Capitol in Atlanta with rapper Ludacris.

Do these big name surrogates make a difference?

"Generally they can help boost turnout, because of all the media attention. Turnout in a runoff election is often very low compared to a presidential election and each side needs to get as many of their voters to the polls as possible," said Bill Schneider, CNN's senior political analyst.

Democrats have so far picked up seven Senate seats in this year's election, with the Republican seats in Georgia and Minnesota still undecided. In Minnesota, freshman GOP Senator Norm Coleman topped his Democratic challenger, Al Franken, by just 215 votes, triggering an automatic recount which will extend well into December.

If the Democrats take both remaining contests, they'll reach their pre-election goal of controlling 60 Senate seats, which would be a filibuster-proof majority. A filibuster is a move by the minority party in the Senate that basically brings the chamber to a standstill by blocking votes on legislation.