WASHINGTON (CNN) -- Congressional Democrats have a bigger majority than they've enjoyed in decades, but that doesn't necessarily mean there will be unity on Capitol Hill. 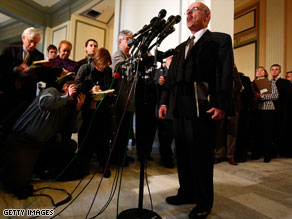 A new battle may be brewing as Democrats fighting Democrats show evidence of a party divide.

The growing Democratic majority could be in deadlock from within on issues ranging from climate change and energy to health care and social security.

"We're not just talking ideology here. The broader your majority, the more you've got different regions of the country that have different economic and social interests that you have to take into account," said Norman Ornstein, a scholar with the American Enterprise Institute.

The clash of the titans was evident just hours after the election ended as a public fight erupted for the leadership of a key committee charged with enacting many of President-elect Barack Obama's agenda items.

Climate change, energy independence, and health-care reform all fall under the purview of the committee.

"It was a contentious race, and it was a close one as well," Waxmam said immediately following the vote. "I want to point out ... that this in no way diminishes the enormous contribution to our country by Chairman John Dingell."

The automaker bailout provides another example of where Democrats aren't in lockstep. Rust Belt Democrats like Michigan Sen. Carl Levin are fighting for some kind of emergency help, even if it means using money targeted at making more fuel-efficient cars. But Democrats from pro-environmental coastal states are cool to the idea.

There are also ideological divisions on how to pay for things, and that's where the more moderate Blue Dogs Democrats, who have increased their numbers, will assert their power.

They are focused on reigning in spending and they've already met with Obama's transition team to push that.

"They are more fiscally conservative; they're worried about pay-as-you-go budgeting. They're more more socially conservative, and you can't do much if you're going to go for just a Democratic majority without accommodating the conservatives," Ornstein said.

Political observers say these roadblocks are largely the result of Democratic gains this election -- replacing Republicans with moderate Democrats, and creating a larger majority that has to work together.

"The country must be governed from the middle. I say that being a proud progressive Democrat in the Congress of the United States and as Speaker of the House," House Speaker Nancy Pelosi said after the election.

But infighting aside, analysts say there's one thing working in the president-elect's favor -- the economic crisis.

Congress and the president work together when under so much public pressure to get things done and fast.

Obama has pledged to work in a bipartisan fashion, and his transition team said it is dedicated to building a well-rounded administration.

All About U.S. House of Representatives • U.S. Senate