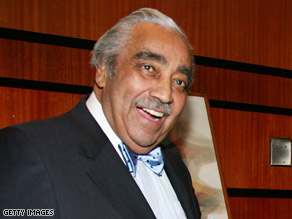 U.S. Rep. Charles Rangel denies any ties between pledges for a project and preservation of a tax loophole.

The article, published Tuesday, says "Congressional records and interviews show that Mr. Rangel was instrumental in preserving a lucrative tax loophole that benefited an oil-drilling company last year, while at the same time its chief executive was pledging $1 million," to a Rangel project at the City College of New York.

Rangel, chairman of the House Ways and Means Committee, denied the allegations spelled out in the article, saying in a statement, "At no time -- never -- did I entertain, promote or secure a tax break or any special favor for anyone as an inducement or reward for a contribution to the City College of New York."

The oil-drilling company in question is Nabors Industries. Rangel met with Nabors CEO Eugene Isenberg, on February 12, 2007, to discuss how a tax increase would affect the company, Nabors lobbyist Kenneth Kies who was at the meeting told CNN.

But Rangel said the donation had nothing to do with the meeting.

"Those who heard me speak about the school program have heard only a case on the merits, and it is and has always been a strong case, based on the welfare of young students and of our community," he said in the statement.

"The article charges recklessly ahead anyway with a host of innuendos to question my motives and actions in supporting the City College program."

In 2002, Nabors Industries decided to reincorporate outside of the United States, allowing it to avoid some federal taxes. A year later, Congress passed a law that would penalize companies that make such moves.

Some lawmakers wanted to make the law retroactive, because others had warned the companies in 2002 to avoid offshore reincorporation. Rangel opposed applying the measure retroactively, saying it would be unfair.

"His opposition in 2007 startled some legislators who had fought alongside Mr. Rangel during his earlier efforts to crack down on Nabors and the other companies, in part because he and the other Democrats had rejected the same argument about retroactivity three years earlier," The New York Times article stated.

Rangel says, "It is a clear matter of public record that I have consistently opposed retroactive changes to tax law because I believe it is unfair to taxpayers and bad tax policy.

In addition, Rangel's attorney told The New York Times that the congressman wasn't aware of the donation being made until a year after the February 12 meeting with Isenberg.

All About U.S. House Committee on Ways and Means • Charles Rangel