(CNN) -- Millions of people are expected to go to Washington to celebrate Barack Obama's inauguration on January 20, but with a troubled economy and pocketbook issues on the mind, the president-elect must be careful to set the right tone. 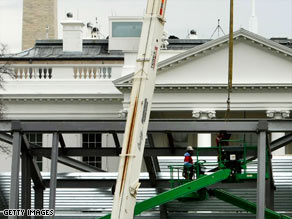 Construction of the inaugural stand continues in front of the White House last week.

President Bush raised a record $42.8 million dollars for his second inauguration, and according to Public Citizen, more than 90 percent of the donations to that ceremony were from executives or corporations.

But this year, some say throwing a multimillion-dollar party would be unseemly in a time when crash, bailout, and foreclosure fill the economic headlines.

"A lot of it is about tone and making sure that the celebrations that do take place are not over the top, that they don't appear to be insensitive to the pain people have right now," said Ryan Alexander, president of Taxpayers for Common Sense.

The inaugural committee for Obama and Vice President-elect Joe Biden has pledged to make sure the ceremony underscores the incoming administration's "commitment to change business as usual in Washington."

The Presidential Inaugural Committee has limited individual contributions to $50,000. There is no law restricting the size of donations, but in the past, inaugural committees have set contribution limits as high as $250,000.

Obama has promised to "take power away from the corporate lobbyists" -- a pledge that would be questioned should the president-elect rely on them to foot his inauguration bill.

"If he can pay for these parties with small donations, I think there'd be a lot more acceptance of that," Alexander said.

Watchdog groups say there are some things Obama can do to take control of the tone. For example, he could make donations to charity, and Michelle Obama could opt for something more reasonably priced than a designer dress.

When Franklin D. Roosevelt took office, he also faced a financial crisis. He gave voters a now famous pep talk about the failing economy, then skipped the fancy inaugural balls because they sent the wrong message.

But analysts say Obama's not expected to go that far because so many people want to celebrate his historic win.

"Washington, D.C., was pro-Obama and had Obama-mania long before November 4. But the moment November 4 occurred, all -- all craziness sort of broke loose," said Anne Schroeder Mullini, a gossip columnist for Politico.

As inauguration organizers work to keep the tone in check, they are speaking out against those trying to make money by scalping tickets to the event.

Tickets for the inauguration are distributed through members of Congress, and just 240,000 seats are available for the actual swearing-in ceremony.

The tickets are supposed to be free, but with demand outpacing supply, a traditional giveaway has turned into a thriving online marketplace.

Legitimate ticket brokers -- the same companies that peddle tickets to rock concerts and NASCAR races -- are selling tickets to the inauguration for thousands of dollars, even for standing-room areas on the National Mall.

California Sen. Dianne Feinstein wants to make that practice a crime, punishable by up to a year in prison.

Organizers of the inauguration say it violates the spirit of the event and could spell disappointment for people who buy tickets for the ceremony.