(CNN) -- Former first lady Barbara Bush will spend the night in a Houston, Texas, hospital Tuesday night after falling ill, according to a family spokeswoman. 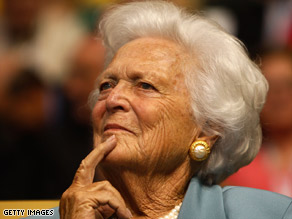 Former first lady Barbara Bush has been admitted to a Houston, Texas, hospital.

Spokeswoman Jean Becker said Bush, 83, was admitted to Methodist Hospital for testing after complaining of stomach pain for several days.

She arrived at the emergency room at about 5:30 p.m. Central Time.

After feeling ill, Bush called her husband, former President George H.W. Bush, at his office urging him to take her to the hospital.

The former president's Secret Service detail drove them both to the hospital, Becker said.

Jim McGrath, a spokesman for Bush's husband said all of the tests were negative.

Bush has been diagnosed with the thyroid condition Graves' Disease. It was not known whether the condition had any relation to her hospitalization on Tuesday.

Bush, the mother of President George W. Bush, was first lady during her husband's term as president from January 1989 to January 1993.

She and the former president split their time between Houston and Kennebunkport, Maine.

All About Barbara Bush • Houston (Texas)