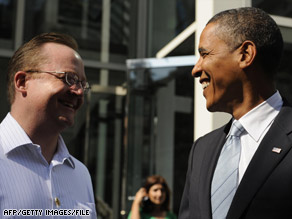 Robert Gibbs will have one of the most highly visible roles in the Obama administration.

Robert Gibbs, an Obama campaign spokesman who also has acted as spokesman for the transition, will become Obama's press secretary, one of the most highly visible roles in the administration.

Gibbs, an Auburn, Alabama, native who has worked for Sen. Fritz Hollings, the Democratic Senatorial Committee and Sen. John Kerry's presidential campaign, was communications director and then a senior strategist for the Obama campaign.

Moran worked for the AFL-CIO, coordinating "Wal-Mart corporate accountability activities," before returning to EMILY's, an organization dedicated to helping Democratic women get elected to office. It had endorsed Sen. Hillary Clinton for president.

See who's on Obama's short list for cabinet posts »

Unlike Gibbs and Pfeiffer, Moran is not already on Obama's communications team.

"These individuals will fill essential roles, and bring a breadth and depth of experience that can help our administration advance prosperity and security for the American people," Obama said in a written statement.

"This dedicated and impressive group of public servants includes longtime advisors and a talented new addition to our team, and together we will work to serve our country and meet the challenges of this defining moment in history."

On Friday, sources indicated that some of Obama's Cabinet posts were close to being filled.

Transition officials told The Associated Press on Saturday that Obama planned to announce Geithner's appointment on Monday, along with that of Lawrence Summers as director of the National Economic Council. Summers is a former president of Harvard University and served as treasury secretary under Bill Clinton.

Two sources said Friday that Gov. Bill Richardson of New Mexico is a serious contender for commerce secretary but that he could be chosen for another senior post.

Geithner has played a large role in the government's efforts to wrangle the credit crisis, which has damaged markets and economies worldwide. Although a number of those efforts have been controversial, Geithner remains a well-regarded figure from Wall Street to Washington.

In 1999, he became under-secretary of the Treasury for international affairs.

Geithner would be charged with restoring stability to the financial markets, the banking system and the housing sector through oversight of the controversial $700 billion financial rescue package, of which about half is still available for use at the discretion of the Treasury secretary.

Currently in his second term as New Mexico's governor, he served as ambassador to the United Nations and energy secretary in the Clinton administration.

Also Friday, Sen. Hillary Clinton's camp shot down reports that she had agreed to accept the secretary of state position.

The New York Times reported that Clinton would give up her Senate seat and accept the Cabinet post, citing two confidants, who said the decision was made after further consultation with Obama about the nature of her role and his foreign policy plans.

A senior Obama aide told CNN there has been no development on a possible Clinton appointment since they informed CNN Thursday that she is "on track" to be nominated for secretary of state.

The sources said Jones has been given the impression by Obama that the job is his if he wants it. But the officials said that private discussions are under way and that no final decision has been made.

The discussions are focused on precisely how much power Jones will have in the staff job, since he is used to being in a command role. Among his many posts, Jones served for several years as the operational commander for NATO.