(CNN) -- President-elect Barack Obama's potential Cabinet is beginning to take shape, as transition team aides say he is closing in on nominations for some of the posts. 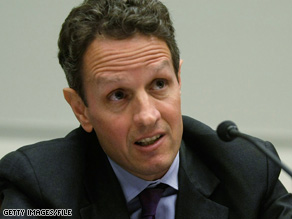 Timothy Geithner reportedly will be nominated for the post of treasury secretary in the Obama administration.

Two sources also said Gov. Bill Richardson of New Mexico is a serious contender for commerce secretary, but that he could be tapped for another senior post.

Geithner has played a large role in the government's efforts to wrangle the credit crisis, which has damaged markets and economies worldwide. While a number of those efforts have been controversial, Geithner remains a well-regarded figure from Wall Street to Washington.

In 1999 he became under secretary of the treasury for international affairs.

Geithner would be charged with restoring stability to the financial markets, the banking system and the housing sector through oversight of the controversial $700 billion financial rescue package, of which about half is still available for use at the discretion of the treasury secretary.

Currently in his second term as New Mexico's governor, he previously served as ambassador to the United Nations and energy secretary in the Clinton administration.

Friday, Sen. Hillary Clinton's camp shot down media reports saying that she had already agreed to accept the secretary of state position.

The New York Times reported Friday that Clinton would give up her Senate seat and accept the Cabinet post, citing two confidants, who said the decision was made after further consultation with Obama about the nature of her role and his foreign policy plans.

A senior Obama aide told CNN there has been no development on a possible Clinton appointment since they informed CNN Thursday she is "on track" to be nominated for secretary of state.

Watch how Bill Clinton factors in »

The sources said Jones has been given the impression by Obama that the job is his if he wants it. But the officials said there are still private discussions under way and that no final decision has been made.

The discussions are focused on precisely how much power Jones will have in the staff job since he is used to being in a command role. Among his many posts, Jones served for several years as the operational commander for NATO.