WASHINGTON (CNN) -- A top Republican lawmaker is accusing employees at the U.S. Central Intelligence Agency of blocking investigations into the downing of a missionary plane in Peru that killed two Americans in 2001. 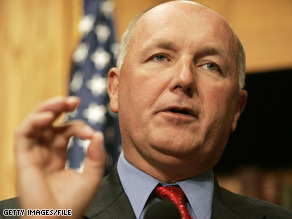 Rep. Pete Hoekstra has called for a new hearing on the finding related to the downing of a plane in Peru.

Rep. Pete Hoekstra on Thursday criticized "rogue" CIA employees involved in a joint CIA-Peruvian anti-narcotics program of withholding information after declassification of a CIA report identifying "routine disregard" of safety procedures that led to the plane being shot down.

A 7-month-old girl and her mother died.

The comments come after a new internal report by the CIA's inspector general -- parts of which were released Thursday -- that said Congress and investigators were not given appropriate access to internal documents regarding the incident.

"This issue goes to the heart of the American people's ability to trust the CIA," the Michigan lawmaker said Thursday. "Americans deserve to know that agencies given the power to operate on their behalf aren't abusing that power or their trust."

Hoekstra, the top Republican on the House Intelligence Committee, has called for new hearings into the incident and further declassification of findings.

The report identifies "sustained and significant violations of required intercept procedures" and found that the "agency incorrectly reported that the program complied with the laws and policies governing it."

CIA senior managers "withheld information" and "denied Congress, the NSC [National Security Council], and the Department of Justice access to these findings," the report says.

The Justice Department in February 2005 ended investigations into whether CIA officers lied to lawmakers and to CIA officials about the operation.

Immediately after the incident, the Peruvian air force said an unidentified plane that had not filed a flight plan had been detected entering Peruvian air space from Brazil.

"Facing such circumstances and, in agreement with established procedures, the intercept system was activated," the air force said in a written statement.

After the missionaries' Cessna 185 did not respond to a command to identify itself, the air force fired on the plane, the statement said.

Michael Loftus, president of the Association of Baptists for World Evangelism, which sponsored the missionaries, said their plane never left Peruvian air space.

It had flown to the Brazilian border town of Benjamin Constant, site of the nearest consulate, to obtain a visa for the infant, he said.

Loftus said pilot Kevin Donaldson had been in radio contact with a tower in Iquitos, Peru.

"Central aviation authorities had given him a landing slot. How could he be in contact with the civil authorities and their own military not know about it?" he said.

The pilot's wife said the Cessna aircraft was brought down in a hail of machine-gun fire.

"Within hours, CIA officers began to characterize the shootdown as a one-time mistake in an otherwise well-run program. In fact, this was not the case," according to the declassified report.

"In many cases," the report says, "suspect aircraft were shot down within two to three minutes of being sighted by the Peruvian fighter -- without being properly identified."

CIA Director Michael Hayden has reached no decision in regard to the recommendations contained in the report, said CIA spokesman Mark Mansfield.

Hayden recognizes the seriousness of the matter and is seeking input from an outside expert before making any decisions, Mansfield said.

A senior U.S. intelligence official said Hoekstra's comments are "puzzling and disappointing" and could be "perceived as political pressure."