WASHINGTON (CNN) -- Two weeks after losing his bid for the presidency in an electoral landslide, Sen. John McCain is beginning the thorny transition back to life out of the spotlight as he weighs his future role in the Senate. 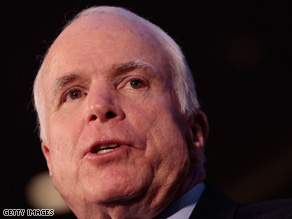 Aides say McCain is looking forward to returning to the chamber full-time after a nearly two-year hiatus.

But the road from Republican Party standard-bearer to merely one of a hundred senators can be a bumpy one, political observers say, especially since the Arizona senator is without a leadership position as his party faces its slimmest minority in the chamber in nearly three decades.

McCain's return to a lower profile is made more precarious by the fact that he has to grapple with a stinging public rejection and ongoing criticism from some Republicans who say his campaign was mismanaged. Other Republicans have said it was downright incompetent.

"When a campaign is over, there is this grieving process that everyone on the staff goes through, but the loss is so much more personal and public for the candidate. It's public repudiation and this death of your dream," said Carol Darr, a veteran of several Democratic presidential campaigns and an adjunct lecturer at George Washington's Graduate School of Political Management.

But political observers and former McCain aides say the Arizona senator will resist retreating into the wilderness, as some presidential losers have, and is instead likely to seek an active role in the Senate when the new term kicks off in January.

In that sense, he is likely to follow the lead of fellow Sen. John Kerry, a Democrat who after his narrow defeat in 2004 returned to the chamber energized and determined to remain a key player on Capitol Hill.

Known for his ability to reach across the aisle, McCain could position himself as a powerful ally of the Obama administration while championing causes he's always held dear, including earmark reform, climate change issues and immigration reform.

"John McCain's days as a presidential candidate are over, and his chance now to leave a lasting impression in public life going forward probably involves working with the man who beat him for the presidency: Barack Obama," Time magazine's Mark Halperin said.

The Obama administration is likely to reach out to McCain on key issues on which it hopes to forge a consensus, though with a nearly filibuster-proof majority in the Senate, the future commander in chief may have little need to do so.

Still, the former Illinois senator won the White House largely on a promise to transition away from partisan politics, and he may see McCain as the ultimate conduit through which to do that.

"You could have a McCain as a centrist who plays the role of consensus-builder on a lot of issues," said Senate historian Donald Ritchie, who's seen several senators return to the chamber after failed White House bids.

But it's unclear just how much political capital McCain has left in Washington, given the extent of his defeat and the GOP's desire to chart a new course, and McCain may find it difficult to corral his Republican colleagues on a set of issues important to him or ones being pushed by the Obama administration.

That fact was made exceedingly clear in late September when McCain's active support of the economic bailout package failed to rally a significant number of Republican lawmakers.

House Republicans' defeat of the bill in the first vote appeared to be a sharp rejection of the party's presidential hopeful, who had only days earlier suspended his campaign with the intention of shepherding the measure through Congress.

"He doesn't have any weight in the House Republican caucus and very few supporters," said Jeremy Mayer, an associate professor at George Mason University's School of Public Policy. "In the Senate, he has some friends like [South Carolina Sen.] Lindsey Graham, but [minority leader Mitch] McConnell has never liked the guy, and he's never been successful at leading his own caucus."

McCain's standing in the party could further decrease if the Republican senator reverts to his tendency to buck the GOP establishment and speak his mind when he disagrees with the leadership. It's a pattern that has given McCain his maverick reputation but one that has often made him more of an ally to Democrats than his own party.

But as he campaigned for the presidency, McCain found himself courting conservatives he used to criticize and serving up Republican red-meat speeches he used to avoid, in the process facing criticism from a host of former allies in the Democratic Party that the once independent-minded senator had changed his stripes.

Now free of the demands required to win the GOP nomination, McCain may have an eye toward regaining his popularity among independents and burnishing his legacy as a straight-talker untethered to strict party orthodoxy.

"His reputation has been impaired. ... It took a beating," Mayer said. "He may want to go back to the old straight-talk John McCain with no filters. And he'll stop feeding red-meat populist conservative sound bites, because he doesn't have to."

All About John McCain • Republican Party