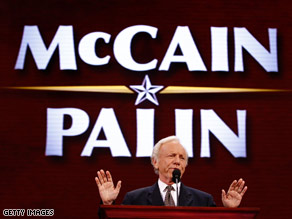 But the veteran lawmaker will, according to the sources, lose a less prominent chairmanship of a subcommittee on the Environment and Public Works Committee.

"He's not happy about it, but he accepts it," one of the sources said.

Several lawmakers involved in the discussions over Lieberman's fate credited President-elect Barack Obama's desire to keep Lieberman in the Democratic caucus and let bygones be bygones as being a key reason Democratic leaders have agreed to support allowing Lieberman to keep his committee chair.

Democrats will meet behind closed doors in the Old Senate Chamber in the Capitol Tuesday morning. The Lieberman matter will be the first item on the agenda and a vote will be cast by secret ballot.

Lieberman and several other senators are expected to make presentations about Lieberman's behavior during the campaign. Several senators who are angry with Lieberman told CNN they would question Lieberman in detail about what he said and why when he was campaigning for Republican nominee McCain.

It is possible additional measures could be taken against Lieberman, or that alternatives could be offered, the sources said. But the question about his Homeland Security Committee has been the most pressing issue.

Lieberman met Thursday with Reid to discuss his future with the Democratic caucus.

After the meeting, the Connecticut senator did not discuss what he and Reid talked about, but said, "The election is over, and I completely agree with President-elect Obama that we must now unite to get our economy going again and to keep the American people safe.

Reid said after the meeting that no decisions had been made during their meeting.

"While I understand that Sen. Lieberman has voted with Democrats a majority of the time, his comments and actions have raised serious concerns among many in our caucus," said Reid.

After the speech, Obama adviser Robert Gibbs said that "Joe Lieberman ought to be ashamed of himself for some of the things he said tonight, not as a Democrat but as an American."

Reid has not been shy in the past about expressing his frustration with Lieberman, who eight years ago was the Democrats' nominee for vice president.

But Reid also repeatedly has said he values Lieberman's membership in the caucus because on most issues, Lieberman votes with Democrats.

CNN's Ed Hornick and Alexander Mooney contributed to this report.