WASHINGTON (CNN) -- President-elect Barack Obama has spoken with two former rivals for the Democratic presidential nomination about the secretary of state position in his administration, sources told CNN on Friday. 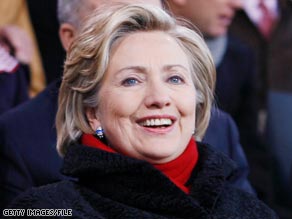 Sen. Hillary Clinton has been mentioned as a candidate for Obama's secretary of state, sources say.

Over the course of the past 24 hours, sources close to Clinton have softened their one-time solid public position that she would not be interested in a Cabinet position. Those sources now say she is clearly contemplating how she can serve the Obama administration.

Clinton traveled to Chicago, Illinois, on Thursday to meet with Obama, sources said, and the two had a "serious discussion" about the issue.

Clinton's response to Obama's overture is unknown, but sources said the New York senator left the meeting with the impression that if she were interested in the post, it would be hers.

Under these circumstances, one source said, a president-elect does not meet with potential Cabinet secretaries unless he is serious about making an offer.

Obama has had "great interest" in asking Clinton to be secretary of state "for a while," another source close to the Obama transition team said. iReport.com: Whom should Obama pick?

"You've got to assume that Hillary Clinton did not come to visit the city of Chicago," the source said.

Should Clinton take the position, the transition team and the senator would have to work out how her husband, former President Clinton, would continue his work with the Clinton Global Initiative without complicating her work as secretary of state, another source close to the Obama transition team said.

"I am happy being a senator from New York. I love this state and this city," Clinton said Monday in response to a reporter's question. "I am looking at the long list of things I have to catch up on and do. But I want to be a good partner, and I want to do everything I can to make sure [Obama's] agenda is going to be successful."

On Friday, Obama spoke with Richardson about the position, a senior Democratic source said. The source said Richardson has always been on Obama's list of possibilities for the key Cabinet position.

Richardson also traveled to Chicago to meet with Obama, according to a source who said the idea of Clinton as secretary of state is "not a done deal."

Richardson withdrew from the race for the Democratic nomination January 10 and later endorsed Obama.

Clinton battled on until June, eventually throwing her support to Obama as well.

A source close to transition team said Obama is trying to build a diverse Cabinet that includes women and minorities and that works as a team.

Also Friday, the Obama transition team announced that the Illinois senator will meet with the man he defeated in the general election, Republican Sen. John McCain, on Monday.