(CNN) -- If you want to work for President-elect Barack Obama's administration, be prepared to spill almost everything there is to know about yourself. 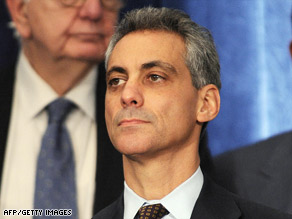 As White House chief of staff, Rahm Emanuel will have a say in many of the new administration's hiring decisions.

The Obama transition team is sending a seven-page, 63-item questionnaire to every candidate for Cabinet and other high-ranking positions in the incoming administration.

The transition team has about 7,000 positions to fill, according to the U.S. Government Printing Office's Plum Book, the quadrennial list of positions subject to presidential appointment.

Watch how detailed the questionnaire gets »

Included are 15 Cabinet positions and nearly 200 ambassadorships as well as agency heads and their immediate subordinates, policy executives and advisers, and top aides to those officials. iReport.com: Who should be in Obama's cabinet?

The largest part of the questionnaire asks prospective White House appointees and their spouses to list real estate and other business transactions, affiliations and relationships as well as personal financial and tax information.

It also asks about writings, speeches, testimony, online communications and even personal diaries.

An entire section requests details on any criminal or civil legal action in which the applicant may have been involved. The last question in that 11-item section asks for details on any child support or alimony orders.

In an apparent effort to avoid the problems faced by several nominees in the last two administrations, a block of four questions is devoted to ferreting out details -- including the immigration status -- of any domestic help the applicant may have hired.

Question 61 seems to have been prompted by the controversy over former 1960s radical William Ayres in Obama's campaign: "Have you had any association with any person, group or business venture that could be used -- even unfairly -- to impugn or attack your character or qualifications for government service?"

Under the final, "Miscellaneous" category, the questionnaire asks for the names and phone numbers of past live-in lovers; whether anyone in the applicant's family owns a gun; the state of the applicant's health; and whether he or she has any enemies.

All About Barack Obama • The White House • U.S. Government