WASHINGTON (CNN) -- Former Republican vice presidential candidate Sarah Palin said Wednesday she does not regret her interview with Katie Couric of CBS and wishes she had been more available to the media during the campaign. 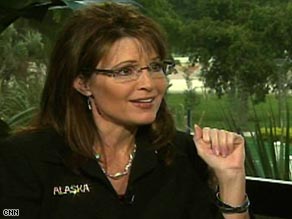 "I should have done it, yes. And her questions were fair," Palin told CNN's Larry King Wednesday. "Obviously being a bit annoyed with some of the questions, my annoyance shows through."

Palin had some well-publicized fumbles during interviews with Couric in late September leading up to her vice presidential debate.

"Certainly I should have done the interview. And to attribute I think that interview to any kind of negativity in the campaign or a downfall in the campaign, I think it's ridiculous."

Palin added she wished she talked more to the media.

In two interviews with CNN Wednesday, Palin reflected upon her unsuccessful bid for the White House and discussed President-elect Barack Obama's incoming administration.

The Alaska governor said she would be honored to help out Obama and his new administration -- even though he did hang around with an "unrepentant domestic terrorist" -- if he asked her for assistance on issues she highlighted her campaign, such as energy or services for special-needs children.

"It would be my honor to assist and support our new president and the new administration," said Palin, whom Sen. John McCain chose as his running mate in August.

When asked about some of the tough rhetoric she hurled from the stump, she said she was "still concerned" about Obama's ties to former Weather Underground member-turned-Chicago college professor William Ayers.

"If anybody still wants to talk about it, I will," she said. "Because this is an unrepentant domestic terrorist who had campaigned to blow up, to destroy our Pentagon and our U.S. Capitol.

"That's an association that still bothers me, and I think it's fair to still talk about it," she continued.

"However, the campaign is over. That chapter is closed. Now is the time to move on and make sure all of us are doing all that we can to progress this nation."

Watch Palin discuss how she could help Obama »

Palin was attending the annual Republican Governors Association convention in Miami, Florida. She was also interviewed for CNN's "The Situation Room" -- the latest of several high-profile appearances for the ex-VP candidate. iReport.com: See readers' questions for Palin

There's speculation that Palin, as well as other incumbent governors at the conference such as Charlie Crist of Florida, Bobby Jindal of Louisiana and Tim Pawlenty of Minnesota, could all have designs on the Republican presidential nomination in the next race for the White House. All three governors were on McCain's list of possible running mates before he selected Palin.

As the 2012 buzz takes off, a new poll suggests that just less than half of all Americans have a favorable view of Palin.

Forty-nine percent of those questioned in a CNN/Opinion Research Corp. survey released Wednesday have a favorable opinion of Palin, with 43 percent viewing her unfavorably.

See how past VP candidates have done in their presidential bids »

That is lower than a previous poll, suggesting that favorable opinions of Palin are dropping among Americans.

"In early September, just after the GOP convention, her favorable rating among registered voters was 57 percent, and only a quarter of all registered voters had an unfavorable view of her," CNN Polling Director Keating Holland said.

"Palin is less popular than Vice President-elect Joe Biden, with a 64 percent favorable rating, or her boss on the GOP ticket during the just-completed campaign, John McCain, who is seen favorably by 61 percent of the public."

The poll also suggests men have a slightly more positive view of Palin than women, with 51 percent of males viewing her favorably, 3 percentage points higher than female respondents. Forty-one percent of males have an unfavorable opinion of Palin, compared with 45 percent of female survey respondents.

Watch what McCain says about Palin »

"With fairly high negatives and lower support among women, who should be a natural constituency for Palin, she's not starting off from a position of strength," Holland said.

"The question is no longer whether Palin was a drag on the McCain ticket but whether her unfavorables could be a drag on a future Palin ticket."

Among Republicans, though, Palin's rating remains high, with 86 percent of Republicans questioned in the poll holding a favorable opinion of her. That number drops to 48 percent among independents and 27 percent among Democrats.

The CNN/Opinion Research Corp. poll was conducted November 6 to 9, with 1,246 adult Americans questioned by telephone. The survey's sampling error is plus or minus 3 percentage points.