WASHINGTON (CNN) -- Sen. John McCain railed against Democratic control of Washington during his closing argument of his presidential campaign. 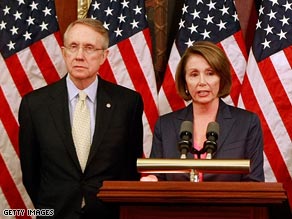 "We're getting a glimpse of what one-party rule would look like under Obama, Pelosi and Reid. Apparently, it starts with lowering our defenses and raising our taxes," McCain said repeatedly on the campaign trail in the final weeks leading up to Election Day.

Not only did Obama beat McCain in the presidential election, the Democrats picked up seats in Congress. And a new national poll suggests why a majority of voters didn't seem to buy McCain's argument.

In a CNN/Opinion Research Corporation survey released Tuesday, 59 percent of those questioned think that Democratic control of both the executive and legislative branches will be good for the country, with 38 percent saying that such one-party control will be bad.

View the public's view of the parties »

"That much good will from the public opens a window of opportunity for the Democrats," CNN Polling Director Keating Holland said. "But the public expects results and may not listen to excuses for very long if a Democratic Congress and a Democratic White House can't get their act together in time."

That is not the case for the Republicans, with a majority, 54 percent, having an unfavorable view of the GOP and 38 percent holding a positive view.

Watch how pessimistic the nation is »

The 62 percent figure is the "the highest opinion of the Democrats in at least 16 years, since before Bill Clinton got elected," said Bill Schneider, a CNN senior political analyst.

"When has the Republican Party image ever been that bad? Answer: when the Republican Congress impeached President Clinton at the end of 1998," Schneider added.

The poll indicates that the public is split regarding top Democrats in Congress -- but that's an improvement.

"Democratic congressional leaders, much maligned this fall, have also seen a boost in their approval rating. Nearly half of those polled now approve of how congressional Democrats are handling their job, up from just a third who felt that way a month ago," Holland said.

"Same thing happens when you ask them about House Speaker Nancy Pelosi and Senate Majority Leader Harry Reid. Good-bad, 50-50, among voters who even know who they are," Schneider said.

It's a different story for the GOP, with just 24 percent approving of how Republican leaders are handling their jobs with nearly three in four disapproving.

But that doesn't mean the public wants to see the GOP shut out of government. Seven out of eight want the Democrats to include Republican views in any legislation they pass.

"What about those times, and they will occur, when Barack Obama and the Democratic leaders in Congress disagree? The public is likely to side with Obama; 59 percent say they are more likely to trust him than the congressional Democrats," Holland said.

With Senate contests in Alaska, Georgia and Minnesota still unresolved, the Democrats have increased from 51 to 57 seats in the chamber. Two independent senators, Joe Lieberman of Connecticut and Bernie Saunders of Vermont, are allied with the Democrats.

In the House of Representatives, the Democrats have picked up 20 seats, to 255, with six races still undecided.

"There's an opening here for a new Democratic majority. But it's just that, an opening. It all depends on how President Obama does. And whether he can overcome the red-blue divide in the country. Something neither of the baby boomer presidents, Bill Clinton and George W. Bush, could do," Schneider said.

The CNN Opinion Research Corporation poll was conducted Thursday through Sunday, with 1,246 adult Americans questioned by telephone. The survey's sampling error is plus or minus 3 percentage points.