(CNN) -- In his first post-Election Day interview, President Bush spoke to CNN's Heidi Collins on Tuesday aboard the Intrepid, a former U.S. Navy aircraft carrier where he was commemorating Veterans Day. He reflected on his presidency and the transition in the works with President-elect Barack Obama. 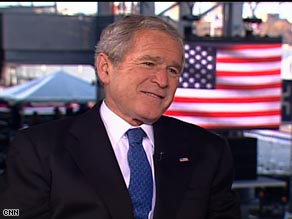 President Bush says he has always been proud of America's volunteer military force.

Here is a transcript of the interview. The president began by talking about his feelings for the troops.

President Bush: Being the commander in chief is as high an honor as you can possibly imagine and I have given it my all to support our military and to support our veterans. What does that mean? It means going to Congress and saying let's make sure our military families have good housing, health care, educational benefits. It means helping to work with the Congress to get money for our veterans, but it really means saying to our troops, "I will make decisions based on what is best for our country, not what is best for me politically." I don't want your troops thinking that the decisions I have made were about politics or about my standing. The decisions were made how to secure this country, how to protect ourselves from the long run. And that was important for those troops to know that their commander in chief not only supported them but stood with them in their mission

CNN: As you stand with them in their mission there are two months left of your presidency. How will that feel to leave office in the middle of two wars?

Bush: I'm trying to figure it out because there's a lot going on. We've got an economic situation, the campaign just ended, we still have troops in harm's way. I'll be meeting with families of the fallen today. This job will end on January 20 and so this is a better question answered on the 21st. I'm not sure what to tell you because I know I'm going to go from 100 mph to near zero overnight. I'm not sure what to expect. I know I'll miss certain things about the presidency. I also know I'm looking forward to getting home, so I've got mixed emotions.

CNN: What will you tell -- and maybe you talked about this yesterday with President-elect Obama -- about taking care of America's veterans and active servicemen and women?

Bush: To the extent that he asked my advice -- and he may want to ask it again -- and the best way to make sure he feels comfortable asking it again is for me not to tell you in the first place on what I advised him. We had a very private conversation. It was relaxed. It was interesting to watch someone that is getting ready to assume the office of the president. It will be a fantastic experience for he and his family. He didn't need my advice about supporting the military. He knows he must do that. We had a good conversation. I was very pleased. Remember the conversation I had with my predecessor Bill Clinton, as a matter of fact called him yesterday and said, Bill, I'm getting ready to meet with the new president and I remember how gracious you were to me. I hope I can be as gracious to President-elect Obama as you were to me. It was interesting yesterday. One of the things President-elect Obama was interested in, after we had our policy discussions, was his little girls, how would they like the White House. It was interesting to watch him go upstairs. He wanted to see where his little girls were going to sleep. Clearly this guy is going to bring a sense of family to the White House and I hope Laura and I did the same thing, but I believe he will and I know his girls are on his mind and he wants to make sure that first and foremost he is a good dad. And I think that's going to be an important part of his presidency

CNN: This is your first interview since the election. I want to ask you, how did you think that turned out? What was your impression?

Bush: My choice didn't win. I was for John McCain. I thought he battled hard, but I meant what I said after the election, that the election of Barack Obama is an historic moment for our country. There are a lot of people in America who did not believe they would ever see this day. It is good for our country that people have hope in the system and feel vested in the future and President-elect Obama has a great opportunity. I really do wish him all the best. I am just as American as he is American and it is good for our country that the president succeeds. The transition that we are working on is a genuine effort to help him be able to deal with the pressures and the complicated issues of the presidency.

CNN: Where do you see this country in four years?

Bush: You know, it's hard to tell. I am pretty confident that we will recover from the economic times. That Iraq will be a symbol of freedom, that Afghanistan will improve. There's a -- the country will be secure. It's gonna be very important for the president and the Congress to work together to make the decisions so that we can succeed in keeping us secure and helping us regain our prosperity.

CNN: I have heard you say many times in the past: "I don't look at polls. I like to do what I want to do." The polling -- are up and down, all over the map. Do you ever get disappointed? Does it make you feel a certain way?

Bush: I think a president who tries to be popular is a president who could fail the country. And I remind people popularity is fleeting. Principles are forever. And there've been times when I've been popular and times when I haven't been popular. But the job of the president is to make good, tough decisions based upon solid principles that are etched in his soul. I know there's this kind of preoccupation by some by popularity polls, but for me they're just moments, they come and go. But what doesn't change [is] what you believe and can you defend those beliefs. And I assure you, as president of the United States you better have a core set of beliefs, because a lot of people are watching you and they are trying to determine where America will stand. A lot of people inside the White House, they are trying to determine whether this person is going to be making decisions based upon core principles or whether the person is going to be all over the map trying to chase popularity.

CNN: If those are principles that you have considered your whole life and coming into this office and they are near and dear to you, I imagine you probably have a moment in your presidency that you are most proud of, and a moment I'm sure you most regret.

Bush: I regret saying some things I shouldn't have said.

Bush: Like "dead or alive," or "bring 'em on." And, by the way, my wife reminded me as president of the United States, you better be careful what you say. I was trying to convey a message. I could have conveyed it more artfully. Being on this ship reminds me of when I went to the USS Abraham Lincoln and they had a sign that said "Mission Accomplished." I regret that sign was there. It was a sign aimed at the sailors on the ship, but it conveyed a broader knowledge. To some it said, well, Bush thinks the war in Iraq is over, when I didn't think that. But nonetheless, it conveyed the wrong message. So, there are things I've regretted. I've had a lot of reasons to be proud, I guess is the right word. I'm proud every time I stand in front of the United States military. I am proud to be the commander in chief of people who are so selfless and so courageous that they would volunteer to serve our country in a time of war. I'm proud when I see people feed the hungry. I'm proud when I'm in Africa and see volunteers helping those citizens dying of HIV/AIDS. I'm proud to know that there are young kids raising money to buy mosquito nets to help fight malaria on the continent of Africa. I cannot tell you what an inspiring experience it has been to be the president of this country, because we are a nation full of generous, courageous, decent people

CNN: So, after all of this, what is next for you?

Bush: I'll probably get back and take a deep breath and I haven't had much time to really settle down and figure out what life's going be like after this. I know I'm going be in Texas. No doubt I'm heading straight home. I miss Texas. I love Texas. I've got lots of friends in Texas. I will probably write a book. I know I'm going to build a policy institute and a library at Southern Methodist University in Dallas, Texas. And other than that, I'm not quite sure yet.

CNN: Do you have an outline for that book yet? What's it going to look like?

Bush: I'm beginning to think about it, you know. I'm beginning to think about it. I want people to know what it's like to make some of the decisions I had to make. What was the moment like. I've had one of these presidencies where I had to make some tough calls. I want people to know the truth about what it was like sitting in the Oval Office, but it's going take a lot of thought and a lot of work to get it out and it will be an interesting project.