WASHINGTON (CNN) -- Interest in President-elect Barack Obama's inauguration is running so high that one ticket broker is asking $20,095 for a single ticket. 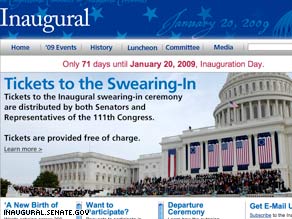 The government has printed 250,000 tickets so far for Barack Obama's presidential inauguration on January 20.

Entry to the biggest event in Washington is free if your congressman or senator grants your request, but with demand outpacing supply a traditional giveaway has turned into a thriving online marketplace.

Legitimate ticket brokers -- the same companies that peddle tickets to rock concerts and NASCAR races -- are selling tickets to the swearing-in of Barack Obama for thousands of dollars, even for standing-room areas on the National Mall.

Organizers of the inauguration say it violates the spirit of the event and could spell disappointment for people who buy tickets for the January 20 ceremony.

Watch why the tickets are going for top dollar »

The government has printed 250,000 tickets so far, holding them in a secure location. For information on how to get one, check out http://inaugural.senate.gov/.

Ticket brokers act as middlemen, selling inaugural tickets they say they purchase from Capitol Hill employees and people who get them from members of Congress.

Since the government releases tickets at the last minute -- less than a week before the inauguration -- ticket brokers cannot ensure they will receive enough tickets to cover their orders.

Web sites promise a full refund if tickets are not secured to buyers, but that offer may be little consolation to people who invest in a trip to Washington to see the inauguration.

Since tickets do not have attendees' names on them, Gantman said it's inevitable some will be sold.

"Some will be distributed this way. It happens with baseball games and concerts. But we are going to take every step we can to make sure these tickets get into the hands of those who themselves intend to attend this event."

Sen. Dianne Feinstein, the chairwoman of the inauguration committee, said Monday she she was prepared to ask Congress to make it a crime to scalp inauguration tickets.

"We have heard reports that there are people trying to scalp Inaugural tickets for more than $40,000 each. This is unconscionable and must not be allowed," Feinstein said in a statement.

"This inauguration will be the major civic event of our time, and these tickets are supposed to be free for the people. Nobody should have to pay for their tickets," she added.

The inaugural committee is alerting lawmakers that it is a violation of Congress' code of ethics for members or staff to sell their tickets.