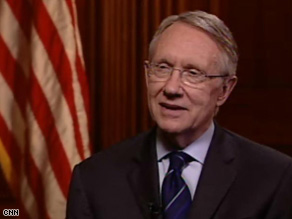 Harry Reid says it's up to the Democratic caucus to make any decision about Joe Lieberman's future.

While he has opposed Democratic efforts to end the war in Iraq, "Joe Lieberman votes with me a lot more than a lot of my senators," Reid told CNN's "Late Edition."

Lieberman, a Democrat-turned-independent, broke with the party over the war in Iraq and ran as an independent after losing the party's nomination in 2006. Since then, he has been the 51st vote that kept the Senate in Democratic hands.

But this year, he was a fixture on the campaign trail with McCain -- and now that Democrats have gained at least six seats in the chamber, Reid is under pressure from many Democrats to punish Lieberman for harsh criticism of Sen. Barack Obama in a speech at the Republican convention.

"Sen. Obama is a gifted and eloquent young man who can do great things for our country in the years ahead. But, my friends, eloquence is no substitute for a record," Lieberman said at the Republican convention in early September.

Lieberman charged that Obama had not reached across party lines to "get anything significant done" and said that the McCain-Palin ticket was "the real ticket for change."

Reid said it was up to the Democratic caucus to make any decision about Lieberman's future, noting that, "Quite frankly, I don't like what he did." But he pointed out that Lieberman has supported Democrats on most issues, including an important budget vote earlier this year.

"For those people beating up on Joe Lieberman, I've done my share," he said. "Recognize the glass being half full, not half empty."

Reid and Lieberman met Thursday to discuss the Connecticut senator's future. Reid said no decisions have been made, and he would not confirm reports that Lieberman was offered the chairmanship of a lower-profile committee on veterans affairs instead of his current post as chairman of the Homeland Security and Governmental Affairs Committee.

A Lieberman aide told CNN that the proposal was unacceptable, and that the senator has been approached by Senate Republican leader Mitch McConnell about switching sides.

Lieberman on Thursday did not discuss what he and Reid talked about, but said, "The election is over, and I completely agree with President-elect Obama that we must now unite to get our economy going again and to keep the American people safe.

Obama campaigned for Lieberman during his 2006 loss to an anti-war primary challenger. But the president-elect's designated chief of staff, Rep. Rahm Emanuel, told ABC's "This Week" that Lieberman's fate was up to his fellow senators.

"The business of what we have to do when we get sworn in is focusing on what the American people care about," Emanuel said. "Priority one is the economy."

All About Harry Reid • Joseph Lieberman