Commentary: Why it's good to have former senators in charge

Editor's Note: William Frist, the former Republican majority leader of the U.S. Senate, is a physician. He was elected to represent Tennessee in the Senate in 1994 and served two terms before deciding not to run for re-election in 2006. 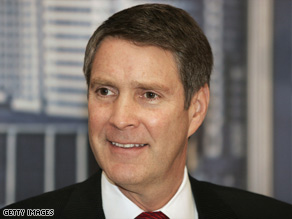 Former Senate Majority Leader Bill Frist says it's good that Obama and Biden are members of the Senate.

NASHVILLE, Tennessee (CNN) -- Now is the time for a new beginning. And how it is approached may well turn on the often overlooked fact that both the president-elect and the vice president-elect are products of the U. S. Senate.

America shines at her best in times of challenge, and never in my adult life have we seen more challenge coming from more dimensions. I encourage Republicans to rally behind this president-elect and openly express support for the call for change throughout our legislative and executive branches.

I encourage Democrats not to repeat the missteps made by Republicans by excluding thoughtful debate. And I encourage the American people to stay involved with the intensity manifested by heightened participation in the democratic process.

My teaching on the Princeton campus last year revealed to me an explosion of energizing interest in "the system" and how to make it better from within -- very different from when I was there 38 years ago and the same activism was channeled toward tearing it down.

The wounds of the campaign are not as deep or angry as the media portray. For many, there is disappointment, and this must be consoled with time and discussion; for more, there is a sense of hope and quiet optimism that fresh ideas and new faces and commitment to collaboration can, if handled with care and grace, nurture a new prosperity.

Having served in the U.S. Senate, I am proud that that body, historically avoided as a source of presidential leadership, produced three of the four candidates and now the president and vice president.

The Senate is a strange animal. Unlike the House, it is weighted to give the minority party exceptional power. And that's why we have these super-majority (and, to the public, usually hard to fathom!) thresholds like cloture and the filibuster.

Both of our new leaders are creatures of this body, a body that our founding fathers deliberately elevated to one of deliberation and discussion and unlimited debate and enhanced minority power.

That unique Senate legislative experience of the president- and vice-president-elect -- with the understanding it brings both to lead on principle but govern with compromise and to respect uniquely the minority's participation -- stations them ideally for a time when the American people expect their government to work together to aggressively attack the problems that face us.

My former colleague John McCain returns to the Senate to participate with a style that fits the time. What made my life tough at times as leader -- his working on his own agenda, working almost obsessively across the aisle, putting principle before party and defending through passionate debate his conservative views -- is what can make him an effective force in shaping the change that these elections spoke so loudly to.

And to the president-elect, what an opportunity! Times are tough, but the people have rallied to your call. You have the followers; you have the believers; even your loudest critics recognize that you are endowed with leadership talents that are precious.

To move the nation forward, keep listening to the American people. Be straight with them, and don't over-promise. Fill the gaps where you lack experience with the brightest minds with the highest values. iReport.com: Share your message for Obama

And finally, though this may appear a bit self-serving, the doctor in me is shouting out not to forget an issue that has been driven to the background by the credit markets, job losses and threats overseas: health care.

Ever-rising health costs drive people to the ranks of uninsured. The 15 million hard-core uninsured need your immediate attention. There is nothing more intimate or more personal to any of us than the health of our loved ones. Don't let it slip to the back burner.

So, even in these tough and depressing times defined by an economic crisis that will -- yes, will -- have an end, I am pretty excited about the future. Let's all play our part as citizens of the greatest and freest country in the world.

The opinions expressed in the commentary are solely those of William Frist.