Lieberman may have day of reckoning with Democrats 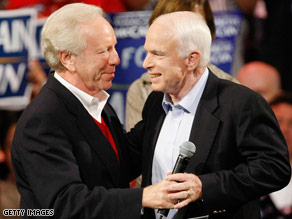 After the meeting, the Connecticut senator did not discuss what he and Reid talked about, but said, "The election is over, and I completely agree with President-elect [Barack] Obama that we must now unite to get our economy going again and to keep the American people safe.

Reid said in a statement that no decisions had been made during their meeting.

"While I understand that Sen. Lieberman has voted with Democrats a majority of the time, his comments and actions have raised serious concerns among many in our caucus," said Reid, D-Nevada.

"I expect there to be additional discussions in the days to come, and Sen. Lieberman and I will speak to our caucus in two weeks to discuss further steps," he said.

Lieberman, the Democrat turned independent who backed Republican Sen. John McCain for president, angered many Democrats -- including Reid -- when he attacked Obama during the presidential campaign.

After his speech, Obama adviser Robert Gibbs said that "Joe Lieberman ought to be ashamed of himself for some of the things he said tonight, not as a Democrat but as an American."

At stake is Lieberman's chairmanship of the Senate Homeland Security and Governmental Affairs Committee and possibly his other committee assignments.

Reid was reluctant to act against Lieberman earlier because Democratic control of the Senate relied on Lieberman's decision to organize with Democrats. But after picking up multiple Democratic seats on Election Day, Reid is politically empowered to strip Lieberman of the coveted chairmanship if he chooses.

The full Democratic caucus would have to approve any action Reid takes when it meets on Capitol Hill in two weeks.

Reid has not been shy in the past about expressing his frustration with Lieberman, who just eight years ago was the Democrats' nominee for vice president.

But he's also repeatedly said he values Lieberman's membership in the caucus because on most issues, Lieberman votes with Democrats.