Pelosi: Obama should govern from the middle

(CNN) -- House Speaker Nancy Pelosi on Wednesday called on President-elect Barack Obama to govern from the middle, as her party sat poised to gain its widest House majority in 15 years. 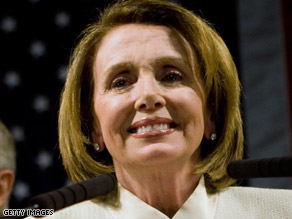 According to projections, Democrats in the House were on track Wednesday to increase their majority by at least 18 seats, a margin that would give Obama a formidable tool to push his legislative agenda after his January 20 inauguration.

Democrats took at least 22 seats from Republicans in Tuesday's election, with the GOP taking four seats from the Democrats, according to CNN projections.

With winners yet to be called for eight of the House's 435 seats, Democrats were projected to win 254 seats, with Republicans having 173.

"I don't know what the final number will be," Pelosi said during a Wednesday afternoon news conference on Capitol Hill. "But it will be well over 250. It's a signal of the change that the American people want."

Pelosi, D-California, said she hoped Obama would "bring people together to reach consensus" on issues that concern Americans. "A new president must govern from the middle," she said.

Topping her agenda, she said, would be "growing the economy, expanding health care, ending dependence on foreign oil and ending the war in Iraq."

When he woke up Wednesday morning, Republican National Committee Chairman Mike Duncan said, he felt like the boy who stubbed his toe, the character in a quote from President Lincoln, who said: "It hurts too bad to laugh, and I'm too big to cry."

Duncan also called on the president-elect to govern from the center and warned that if Democrats moved too far to the left, Republicans could take back seats in the 2010 midterm elections.

"The last two times Democrats controlled the House, Senate and the presidency, they choked on the bone of responsibility," he said. "They lurched far to the left and introduced the country to President Ronald Reagan and Speaker Newt Gingrich."

Heading into Election Day, the Democrats had a 235-199 House majority. The Democrats' gains come two years after they took control of the House -- with a gain of 30 seats -- after 12 years in the minority.

Here are highlights of other races from Tuesday with projected winners:

Democrats gained at least two seats in Ohio, including that of Rep. Steve Chabot, who was seeking an eighth term in a Cincinnati-area district that normally votes about evenly for GOP and Democratic presidential candidates.

• Freshman Rep. Michele Bachmann, R-Minnesota, was projected to survive a race that tightened after she accused Obama of having "anti-American views." She was leading Democratic challenger Elwyn Tinklenberg 47 percent to 43 percent with 86 percent of precincts reporting.

In June 2006, Bilbray narrowly won a special election to fill the vacant San Diego seat that once was occupied by disgraced former Rep. Randy "Duke" Cunningham.

• There was a party change in the race to represent New Jersey in the House. Democrat John Adler, 48, defeated Republican Chris Myers, 42, a Navy combat veteran. Adler, an attorney, sponsored New Jersey's 2006 law prohibiting smoking in indoor public places and workplaces. He was also the sponsor of a law toughening car emission standards in the state.

• Democrats took power from Republicans in Idaho, too. Walt Minnick beat Republican William Sali in a race for the House. Minnick has an MBA and law degree from Harvard University and served as a Nixon White House staffer in the early 1970s before starting a 21-year career at a wood-products maker.

Not all 435 seats will be decided immediately. Two Louisiana districts used Election Day for primary runoffs; the general election for those seats will be December 6.