Obama: 'This is your victory'

(CNN) -- Barack Obama told supporters that "change has come to America" as he claimed victory in a historic presidential election. 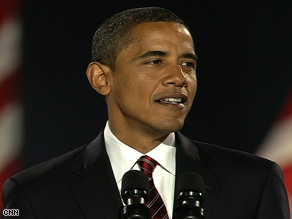 "The road ahead will be long. Our climb will be steep. We may not get there in one year or even one term, but America -- I have never been more hopeful than I am tonight that we will get there. I promise you -- we as a people will get there," Obama said in Chicago, Illinois, before an estimated crowd of up to 240,000 people.

With Obama's projected win, he will become the first African-American to win the White House.

McCain called Obama to congratulate him, and Obama told the Arizona senator he was eager to sit down and talk about how the two of them can work together.

Bush told Obama he was about to begin one of the great journeys of his life, and invited him to visit the White House as soon as it could be arranged, according to White House spokeswoman Dana Perino.

Obama will be working with a heavily Democratic Congress. Democrats picked up Senate seats in New Hampshire, New Jersey, North Carolina and Virginia, among others. Read about the Senate races

Flanked by American flags, Obama told the roaring crowd, "This is your victory."

"To those Americans whose support I have yet to earn -- I may not have won your vote, but I hear your voices, I need your help, and I will be your president too," he said.

Supporters in Chicago cheering, "Yes, we can" were met with cries of "Yes, we did."

More than 1,000 people gathered outside of the White House, chanting "Obama, Obama!"

"This was a long and hard fought campaign but the result was well worth the wait. Together, under the leadership of President Barack Obama, Vice President Joe Biden and a Democratic Congress, we will chart a better course to build a new economy and rebuild our leadership in the world."

"They understood his vision of a fairer and more just America and embraced it. They heard his call for a new generation of Americans to participate in government and were inspired. They believed that change is possible and voted to be part of America's future," the Massachusetts senator said in a statement.

As results came in Tuesday night, Obama picked up early wins in Pennsylvania and Ohio -- states considered must-wins for McCain.

Obama also won Virginia, a state that has not voted for a Democratic president since 1964.

Going into the election, national polls showed Obama with an 8-point lead.