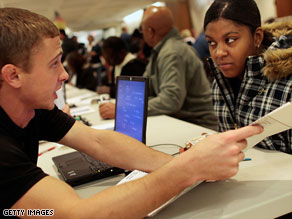 An election worker explains a sample ballot on Friday at an early voting location in Dayton, Ohio.

Both candidates are hoping to reap the lion's share of more than 23 million votes that have been cast nationwide. They're targeting states where polls remain open through the weekend -- and, in some cases, into Monday.

Calculations by CNN and other news organizations indicate that many, if not most, of the early votes in more than 30 states are being cast by registered Democrats, although it's unknown who voted for which candidate.

"It would surprise me, but Republican voters in early voting states may simply be holding their ballots," Paul Gronke of the Early Voting Information Center said Friday. "But I wouldn't be surprised to see the Republican race start to catch up a little bit."

See where people are voting early »

Many early voting states do not specify party affiliation for voters. As with early voting statistics in every state, these are not election results. Voters who are registered with a political party don't always vote for that party's candidates.

McCain campaign spokesman Tucker Bounds concedes that Democrats have done a good job of motivating supporters to get to the polls in early voting states.

McCain "encourages it, but it's not the primary driver of our get out the vote effort," Bounds said. "And I think that's in sharp contrast to the Democrats, who have prioritized early voting."

Obama campaign manager David Plouffe said Friday that the campaign has been successful motivating voters to cast ballots early, thanks to a vast national network of neighborhood captains, whom he said will be out in full force this weekend in North Carolina and Florida.

"We are confident that we have a lot of good voters left," Plouffe said, adding that Obama plans to stump hard this weekend in western states such as Colorado, where the campaign is targeting independent voters.

Michael McDonald of George Mason University predicted that McCain will have a "very tough time in some of the western states like Nevada, Colorado and New Mexico, just because we're seeing that Democrats are apparently casting a lot of ballots in those states."

The GOP nominee is expected to stop this weekend in Ohio, Indiana and Florida, where the early votes between GOP voters and Democrats have been fairly even.

In the end, McCain may benefit from mail-in absentee ballots, which traditionally favor Republican candidates.

"We feel like we've been winning absentee ballots," Bounds said. "Florida elections tend to be close, and absentee voters are very important in Florida considering the number of servicemen and women that serve overseas that vote absentee."

Early voting is handled differently in every state. But in general, it allows voters to cast ballots in person before Election Day using either voting machines or so-called absentee ballots, without having to provide an excuse.

Although McCain could benefit from motivating early voters to get to the polls Saturday, Sunday and Monday, he must not neglect voters in the crucial non-early voting state of Pennsylvania, McDonald said.

"I'm expecting a little bit of tightening in the race before Election Day," said McDonald, who closely tracks early voting trends. "Some of these close battleground states like North Carolina, Missouri and Indiana could go more firmly toward McCain."

About half the state's 100 counties have voted to extend voting Saturday by two hours, said state election board deputy director Johnnie McLean.

The entire $3 million early voting project, she said, "will enable voters who come on Election Day to vote without staying until midnight."

To the south in Georgia, officials in Fulton County told CNN affiliate WSB-TV that they are considering extending early voting through the weekend. Read more about possible extended early voting

Georgia also has set records in the past two weeks of early voting, and the Obama campaign boasts 4,800 captains who were recruited during the summer and early fall.

CNN's Debra Alban and Kyle Almond contributed to this report.