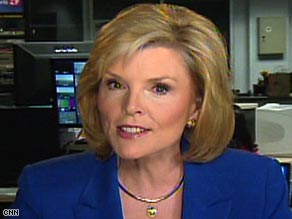 WFTV-TV anchor Barbara West tells Larry King she was doing her job as a reporter when she interviewed Sen. Joe Biden.

Critics said WFTV-TV anchor Barbara West of Orlando had an agenda and was asking biased questions. Biden responded, "Is this a joke?"

CNN's Larry King on Monday talked with West about the interview on "Larry King Live."

Larry King: Your recent grilling of Joe Biden has stirred up a lot of controversy. Let's take a look at part of it, and we'll get your comments. Watch.

Sen. Joe Biden: Are you joking? Is this a joke?

Biden: Or is that a real question?

Biden: He is not spreading the wealth around. He's talking about giving the middle class an opportunity to get back the tax breaks they used to have.

I know this has been a pretty mean campaign. I was on a television station the other day and doing a satellite feed to a major network in Florida. And the anchor quotes Karl Marx and says in a sense, "Isn't Barack Obama Karl Marx?" You know I mean folks, this stuff you're hearing, this stuff you're hearing in this campaign, some of it's pretty ugly. [Video clip ends]

King: All right, Barbara, what were you getting to, since generally the redistribution of the wealth is a graduated income tax?

West: Well, Larry, no, I don't believe that it is just a graduated income tax. I think a lot of people who are talking to me out on the street are saying they are very, very concerned that this idea of redistributing the wealth means taking it out of somebody's pocket who is a wage earner and putting it in somebody's pocket who refuses to work. And they're asking about. That's what they don't want. That is what they want to know, what does this really mean? My job as a journalist is to ask those questions and get those answers, and I don't believe I got answers at all.

King: Was the implication in the question that Barack Obama is a Marxist?

West: I was asking him to tell us about how Barack Obama's redistribution of wealth was different from that quote by Karl Marx, that's all I wanted to know.

Watch as West defends her questions »

And I -- my job is to ask tough, probing questions of the candidates. I had a very short time to be able to do that, only about four minutes. There were issues that I wanted to cover, including the issues about ACORN and the abuses that they've done with voter registration, particularly here in Florida, and Florida is such a key state.

And also this issue of the redistribution of wealth, as well as Sen. Biden's comments about "You mark my words, in six months, Barack Obama will be tested."

West: But it was his caveat afterward that was the issue that I was questioning, and that is it may not be readily apparent as to what, as to whether or not the actions or whatever he does are in fact the appropriate ones. And so America, stand with him and trust him.

West: I just wanted answers to those questions.

King: The Orlando Sentinel reports that you are registered as a Republican; your husband is a Republican strategist. Is that true?

West: Let me correct that. My husband did do consulting for the Republican Party back in the Clinton administration, and he also worked for Sen. Paul Wellstone, who was a very liberal Democrat at the time, and they were working together to shape the media message as far as the sex slave trade was concerned. He was sent by the Clinton administration to go to Europe and also South America to consult with local officials who were perceived as friends of America in fighting the war against drugs.